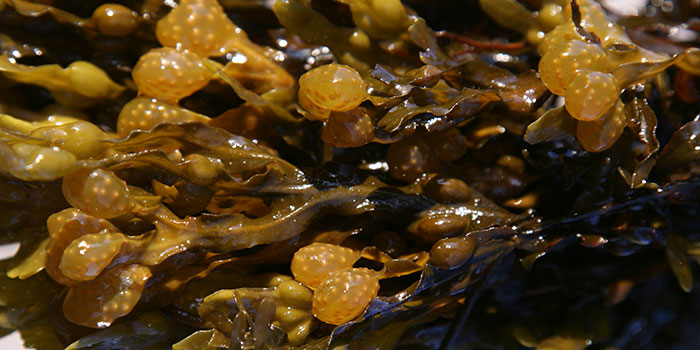 Seaweed has traditionally been a regular part of the Greenlandic diet, but over time, imported vegetables have become popular leading to seaweed being a rare feature nowadays in the average diet.

Replacing some of the imported goods with naturally occurring Greenlandic seaweed, which in many ways has a nutrition profile that is similar to various vegetables, would have a positive effect on the climate impact of the diet. A PhD study from the National Food Institute has therefore studied 10 different Greenlandic seaweed species to assess whether they are suitable for human consumption.

Seaweed is generally nutritious and safe to eat
Most of Katharina Johanna Kreissig’s fieldwork was conducted on the west coast of Greenland near Arctic DTU’s campus in Sisimiut. Her analyses show that Greenlandic seaweed species are generally full of healthy nutrients such as calcium, magnesium, iron and omega-3 fatty acids. At the same time, they contain insignificant amounts of various heavy metals such as arsenic, cadmium, lead and mercury.

However, the large leaved seaweed species are generally high in iodine. To avoid an excessive iodine intake, it would be necessary to process these kelp species to reduce the iodine content. For seaweed that grows close to sewage outlets, the study also shows a risk of unacceptable levels of disease-causing microorganisms. Therefore, seaweed harvested from such areas should not be used as food.

Katharina Johanna Kreissig estimates that Greenlandic seaweed could potentially replace between 5-20% of Greenland’s imports of vegetables (e.g. as substitutes for frozen spinach or Asian seaweed salad).

She also believes that Greenlandic seaweed could become a valuable export commodity. “The knowledge generated in this project about the makeup of the seaweed provides a basis for Greenlanders to benefit more from this underutilized, nutrient-rich, aquatic resource,” Katharina Johanna Kreissig says.