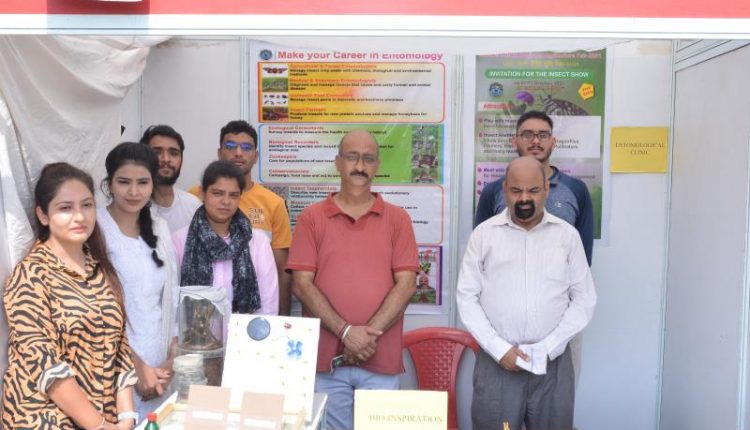 The entomological innovations and interventions were displayed in the five day fair. The foremost point of attraction was insect museum depicting biodiversity of Jammu region, showcasing world of insect in the form of bees, butterflies, beetles, grasshoppers, dragonflies etc. Another focal spot was eco friendly interventions to manage harmful insects through available Bio resources, Botanicals and Microbes while conserving and enhancing beneficial insects through bioengineering and seed mixtures.

A large number of farmers and children were imparted awareness on these aspects. Further insects have aesthetic value as a result of their ubiquity and variety, which could inspire for creative art and products in daily life. Therefore, a separate sale counter was displayed for insect based crafts like true butterflies in photo frames which can be used as decorative wall arts in the houses, painting and the products that are derived from insects especially Honeybee and lac insect . For instance Bee venom for apitherapy, Bee Pollens as a source of protein and management of seasonal allergies and build resistance in body, Bee Propolis which has anti fungal properties and also treat cold sores and Bee Wax that is meant for used in beauty products , organic candles without any chemicals used . Papaya candles made up of papaya stems and bee wax only. The other products were based upon the use of resins of lac insects for value addition of ornamentals , decorative items etc

In order to create awareness about the positive role of insect in human life, the students were involved to play with insects to get acquainted with their behaviour and role in the ecosystem. The insect games developed and designed by the Entomological Club for the first time in India under the leadership of Dr R K Gupta and his team Dr R S Bandral, Dr Magdeshwar, Dr Uma Shankar, Dr Amit and Dr Devinder Sharma were played in this event. Many visitors, school and college children enjoyed these games. The first one was Entomo Tambola which was like conventional tambola. The main objective of the game is to promote awareness about insects besides entertaining the participants with the motive of playing while learning. Entomological Club that was formed to conserve and promote insects in the Jammu region, believe that these kinds of activities and games will help to promote interest among common man regarding insects that will help in conservation of insects. Another game was the insect acoustic games The game was like musical chair but based on the various kind of sounds of insect. The objective was to develop interest in children and with the insect sounds they’ll be able to recognize them .In other event, live caterpillars race was organized and played. Participants chose their pawns according to their will and the caterpillars were allowed to run and the quicker in a transparent polytube.

Dr R K Gupta informed that as per the instructions of Vice Chancellor, Dr J P Sharma to reorient entomological education as per National Education Policy, this division under the supervision of the Faculty, the students and scholars under the banner of Entomological Club organized an innovative stall on Entomo mimmetics : an emerging field of Entomology to inspire engineers to develop and design machinery, arms, Defense warfare and robots etc. This particular stall of Entomological Club was applauded with appreciation by all kind of visitors while having a look at Stealth Bombers which were designed mimicking the flight ability of insects called hawk moth. Small scale models based on hawk moths was depicted and deliberate. Another feature of this stall was Excavator machines that were inspired by the front digging legs of mole cricket and preying mantis. Robots based on the movement of cockroaches were also displayed and its use in urban warfare to counter terrorists was explained. Similarly, use of a front faced video camera and 360 degrees camera and bullet camera inspired from the eye of the insect called dragonfly was deliberated . Solar cells based on the wings of butterflies that are covered in randomly spaced holes that allow butterfly to absorb more of the sun’s heat offer a way to improve the efficiency of thin-film solar cells.

In a clinical stall named, We the Urban Pest Managers, the Entomological Club scholars extended consultancy services to the visitors who were amazed to experience detailed knowledge on household insects that are known to occur frequently in our dwellings, damage our food materials and transmit various kinds of diseases and cause annoyance to us. These insects are known as household insect pests. These include cockroaches, bed bugs, houseflies, ants,mosquitos,termites. The visitors were amazed to utilize free consultancy service in urban pest management and sought our future services on a no profit no loss basis.