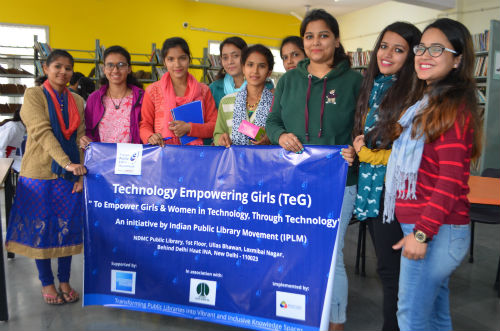 New Delhi: In an effort to reposition public libraries into vibrant and inclusive knowledge spaces, Indian Public Library Movement (IPLM) launched its program TEG (Technology for Empowering Girls/Women) with the support from American Express run in association with NDMC through the platform of public libraries and is executed by READ India in New Delhi at NDMC public library, Laxmibai Nagar.
Aligned with the national agenda- India vision 2022 for “Digital India”, TeG program has three important and unique elements; “Empowering girls in technology”, “Empowering girls through technology” and “the usage of Public Libraries as the platform for the conduct of the program”. The initiative is aimed to help end the gender technology gap and empower women and adolescent girls to create innovative solutions to advance equality of their lives and in turn their communities.

Launching the TeG program Dr. Shubhangi Sharma, Executive Director, IPLM said ‘’ Public Libraries are our cultural heritage. We have come up with innovative programs to engage with various communities and transform library into a cultural hub. TeG program will attract the young crowd and inspire them to avail the benefit. We plan to extend the program in others states shortly.”

The innovative training program is a 42 hours’ basic course designed to support the National Digital Literacy Mission with a specific focus to women and girls in semi urban and rural India. The program will train beneficiaries on the knowhow of ICT, will impart information and awareness on the use of technology for networking, safety, information & knowledge (on health, rights and digital transactions), career and livelihood and will also educate them in soft skills for enhanced career opportunities. This program will make the women more digitally savvy ultimately empowering and equipping them to become independent and self-reliant individuals. They are also then better skilled to compete for opportunities which were earlier beyond their reach. Post training program these trained girls/ women will be assessed and certified appropriately under the banner of TEG program.

Ms. Geeta Malhotra, Country Director, READ India said “ IPLM and READ India has joined hands to train girls who are from marginalized groups to use technology for their day to day life, how they can learn basic computer and advanced computer including typing so that they can get jobs in nearby areas. The purpose is how the skills could be combined with the life skills also, so the group will be trained on life skills education as well as soft skills.”

The program was rolled out in New Delhi in association with NDMC (New Delhi Municipal Corporation) and through their public libraries at three locations is expected to reach out to a total of 600 girls/women between the age of 15-25 years. It is also been rolled out in two location in Gurugram. The launch program was attended by young crowd along with their parents. A Nukkad Natak emphasizing the role of technology was staged inside the library, indicating the new environment inside the library.

IPLM is a multi-stakeholder movement hosted by NASSCOM Foundation spread across 23 states covering 120 districts and more than 220 libraries at various levels. This movement intends to develop a robust multi-stakeholder campaign around public libraries re-visioning its role in the present times. The idea of the movement is to create evidence based advocacy for public Libraries by building model libraries in different parts of the country working closely with state governments

Dr. Himadri Das to preside over as the new Director of MDI