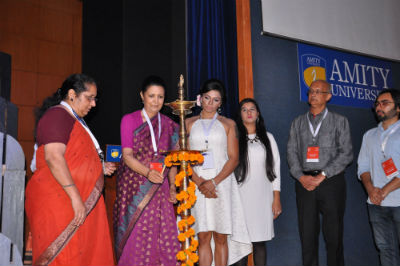 Noida: The independently produced event- TEDx AmityUniversity, operated under a license from TED and aimed at providing a unique platform for speakers to transfer their energy and experience, thereby leaving an everlasting impact on the listeners to inspire Change. Change Makers from across the country gathered at TEDx AmityUniversity to share their ideas and stories while motivating a multitude of listeners.

Delivering her TEDx Talk on Disability and the rights of disabled people, Ms. Nidhi Goyal- Disability Rights and Gender Justice Activist and India’s first female disabled stand-up comedian, stated that people with disabilities are not considered normal individuals in society; either they are looked upon as super humans or below human beings. She stressed that disability is not contagious and disabled people are not “others”. Talking about women with disability, she stressed that women with disability are not considered women enough to get married or become mothers since they are always seen as seekers of care and never as nurturers. She remarked that disability does not stop people from living life or having myriad experiences but it is the attitude of the people around. She implored that people with disability need to be heard and recognized as human beings and they don’t need a change but a wave or change.

Mrs. Meera Shankar- Former Indian Ambassador to USA & Non-Executive Director, ITC Limited, while delivering her talk, stated that the entire world is in a flux and all the certainties are being re-shaped. She stressed that the changes are happening at various levels across the world which not only hold promise of better future but also a risk of catastrophe. Elaborating on the changes witnessed by world, Mrs. Shankar outlined that next generation technologies with great speed and enormous scope are enhancing the productivity and efficiency. They are geared up to herald fourth Industrial Revolution. Dwelling on the next level of change, she cautioned that looming crisis of global warming threatens the existence of human beings on the planet and shared that with growing awareness about the same globally, there has been a decline in fossil fuel economy and renewables have been coming up as viable options for the future. She remarked that the changes are occurring at a time when technology is crossing borders. She stressed that growth of new technology would lead to scraping of baseline jobs in IT, which requires less skills. She averred that in future the focus will be on education, skilling and re-training which will become a lifelong process.

Mr. Jagdish Chaturvedi- Director, Clinical Innovations and Partnerships at Innaccel Technologies presented a talk on ‘Benefits of Failing Successfully’ and shared his life experiences of failing at different stages of life. Dwelling on the benefits of failing, he said that failure keeps a person grounded and it is important to realize that no matter how prepared a person is, mistakes are inevitable in life. He further added that sharing mistakes can make a person likeable as people like to communicate with a person with whom they can relate to. Mr. Chaturvedi emphasized that if a person learns from one’s mistakes then it reduces disappointments from further failures. It also improves the coping skills and builds self-esteem as the person learns to overcome the consequences of failing. “Failure and success are not end results; they both are part of the journey towards the goal.” opines Mr. Chaturvedi.

Mr. Rohit Kumar- a self-taught Speed Artist created a mesmerizing portrait of Late Sh. Abdul Kalam with the lightning speed of his arms as he poured his creativity onto the canvas. While addressing the young students, he advised them to don’t pursue their passions in life, even if they don’t have supporting Degrees or qualifications. He stressed that Self learning is the best learning and one can follow his /her passion through self-learning.

DC Shopian flags-off a group of farmers for exposure tour