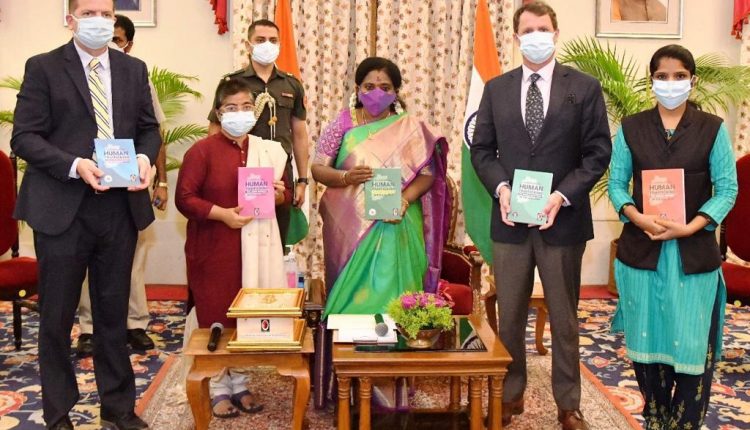 Hyderabad: The Governor of Telangana, Dr. Tamilisai Soundararajan, launched Anti-Human Trafficking handbooks that were developed through a collaboration between the U.S. Consulate General Hyderabad and Prajwala, an anti-trafficking NGO in Hyderabad. Acting Consul General, U.S. Consulate General Hyderabad, Clark Ledger attended the event at the Raj Bhavan which coincided with the UN World Day Against Human Trafficking.

The handbooks will be used to train and empower district-level law enforcement and prosecution agencies across the states of Andhra Pradesh, Telangana, and Odisha to be more effective in countering Trafficking in Persons (TIP).

The target audience for the handbooks are first class magistrates and sessions judges; prosecutors; child welfare committee members; district child protection officers; and relevant civil society organizations across the three states. The handbooks compile all relevant laws, local policies and legislation, and court rulings for each state so that prosecutors have everything they need in one place.

Andhra Pradesh government has signed an MoU with BYJU’S to…

Andhra Pradesh Govt to give tablets to School Students

Speaking on the occasion, Dr. Tamilisai Soundararajan expressed her deepest anguish about the situation of trafficking and reiterated the firm commitment of the Government to fight this problem. She urged all stakeholders to unitedly ensure rehabilitation of the victims.

Speaking at the event, Mr. Ledger said, “All of us – governments, law enforcement, civil society and individual citizens – must combine our energy, knowledge, and resources to prevent trafficking.” He added that the U.S. Embassy and consulates have built partnerships with organizations in India that are actively engaging in anti-trafficking initiatives. “One that we are particularly proud of is our partnership with Prajwala, which resulted in a major survivor-led, anti-trafficking caravan that traversed Telangana, Andhra Pradesh, and Odisha in 2016, informing vulnerable communities about what they can do to combat human trafficking. And now again we have successfully partnered with Prajwala on the handbooks that are being released today,” he said.

Sunitha Krishnan, the founder of Prajwala, stressed the need to listen to the voices of victims, which is the theme for this year’s World Day Against Trafficking in Persons. She added that it is important to develop victim-centric anti-trafficking programs and she lauded the new draft Anti-Trafficking Bill as such an effort, which will break the foundation of organized criminal syndicates.

Andhra Pradesh Govt to give tablets to School Students