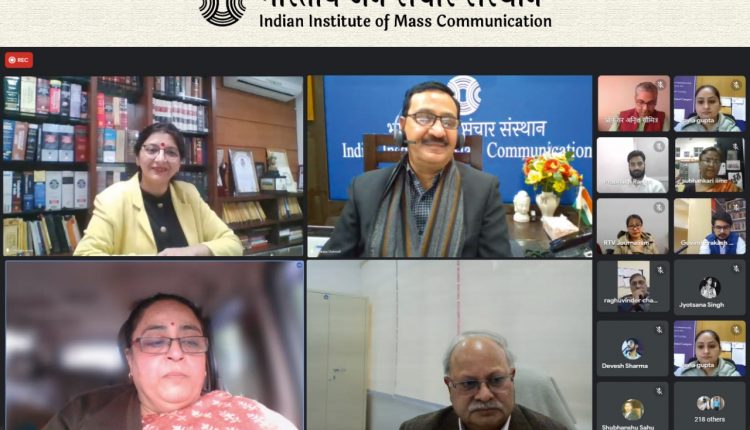 Tell the story of India to the world: Monika Arora

New Delhi: Supreme Court advocate Ms. Monika Arora has described the Constitution of India as the cornerstone of Indian values. She said that Indian values are enshrined in the Fundamental Duties given in the Constitution. If the younger generation follows these duties, then the society and the country will progress continuously. It is imperative that young journalists tell the story of India to the world. Ms. Arora addressed a programme ‘Friday Dialogue’ organized by the Indian Institute of Mass Communication (IIMC) on the occasion of ‘Constitution Day’ on Friday. On this occasion, the Director General of IIMC, Prof. Sanjay Dwivedi was also present.

Expressing her views on the subject, ‘Constitution of India : The Embodiment of Bharatiya Values’, Ms. Arora said that the path of peace that the whole world is looking for today, its path passes through the Constitution of India. The framers of our constitution had said that if you want to find a solution to any problem, then look to India. ‘Bharat’ means people engaged in the search for light. If you want to know India, then it is necessary to know Bharat first. She said that despite being the biggest constitution in the world, the Indian Constitution has always remained alive and relevant. As citizens of the world’s largest democracy, it is up to us to know the basic spirit of the Constitution, so that we can understand our rights in a meaningful way.

Extension lectures at Dept of Medicine

On this occasion, the Director General of IIMC, Prof. Sanjay Dwivedi said that our constitution is not a motionless but a living document. We have amended the Indian Constitution many times. Our democratic experience over the past 72 years has been positive. Our country has emerged as the largest democracy in the world. According to Prof. Dwivedi, we are at such an important time in our history, where we are growing steadily as a major world economy. If we perform our duties towards the national objectives and constitutional values with devotion and commitment, then the country will progress at a rapid pace on the path of development.

The head of IT department Prof. (Dr.) Sangeeta Pranavendra moderated the programme and Prof. (Dr.) Virendra Kumar Bharti, HoD of the publication department, gave the vote of thanks.

Extension lectures at Dept of Medicine