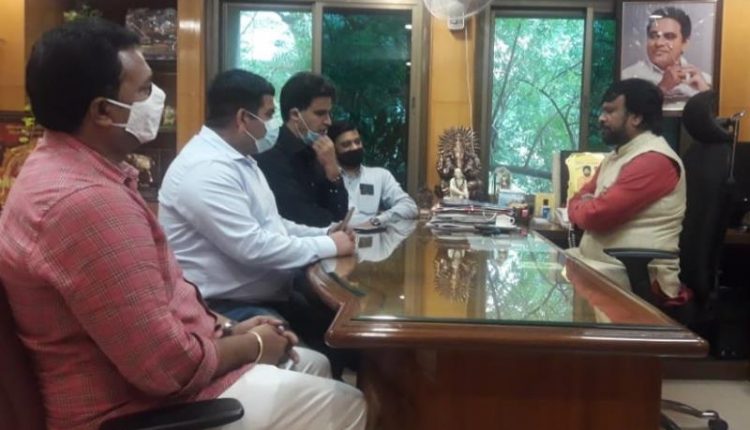 HYDERABAD : The film makers of Telugu cinema (Tollywood) are keen to explore Jammu & Kashmir as a shooting destination for the upcoming movies.

This was disclosed by the office bearers of Telugu Film Producers Council and Telugu Film Directors Association in a meeting with the officers of J&K Tourism Department here today.

A team of officers from the Tourism Department, these days, is on a visit to Hyderabad to interact with members of tourism trade, media, film makers and other stakeholders.

During the meeting, the officers informed the office bearers of these organisations about the recently launched Film Policy by the J&K administration under which all film permissions have been brought under single window clearance mechanism besides incentivising the producers opting to choose shooting in J&K.

The office bearers of Telugu Film Producers Council and Telugu Film Directors Association comprising T. Prasanna Kumar, Mohan Vadlaptla and N. Shankar and Tamareddy Bhardawaj appreciated the move of the Tourism Department to reach out to them to promote film tourism in J&K. They appreciated the recent launch of the Film Policy by the J&K administration and informed that they would be keen to explore J&K for the shootings of their upcoming movies. In this regard, they informed the officers that their respective organisations would be discussing the details of the Policy and would plan a familiarisation trip accordingly.

The officers informed the members of Golf association that Golfing circuit of Jammu & Kashmir comprising the iconic Royal Springs Golf Course, Pahalgam Golf Course, historic courses like the Gulmarg Golf Course and Kashmir Golf Course besides Jammu-Tawi Golf Course provides a rich and varied world class experience to visiting golfers which is unparalleled in rest of the country.

Few days back the prestigious PGTI tournament was played at picturesque RSGC, Srinagar which saw some of country’s top golfers like Jyoti Randhawa, Udayan Maney, Jeev Milkha Singh and others playing on the Srinagar turf. This tournament was organised after seven years.

Similarly, the officers informed that many golf tournaments of national standard are lined up for next two months.

Earlier in the day, the team of officers called on the Chairman, Telangana State Tourism Development Corporation, Uppala Srinivas Gupta and briefed him about their visit.

The team of officers comprising CEO, Rajouri Development Authority, Vivek Puri and Deputy Director, Tourism, Kashmir, Dr. Ahsanul Haq Chishti is on a visit here and yesterday they had detailed interactions with members of media and travel operators of Telangana and Andhra region.