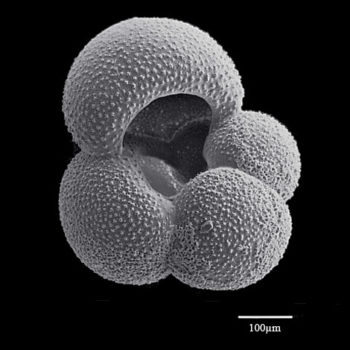 Co-authored by Yige Zhang, assistant professor in the Department of Oceanography at Texas A&M University, and oceanography graduate student Xiaoqing Liu, the research was conducted by an international team and recently published in the Annual Review of Earth and Planetary Sciences.

This new environmental reconstruction research shows that 21st century carbon emissions have the potential to return atmospheric carbon dioxide (CO2) to levels not seen since the much warmer climates of Earth’s distant past.

The study found CO2 levels of more 1500 parts per million (ppm) in the atmosphere associated with extreme global warmth 50 million years ago, a climate so warm that no ice existed on the poles, the researchers said.

“For instance, at CO2 levels of around 1500 ppm, last seen about 50 million years ago, it was so warm that we find fossilized alligators in the Arctic,” said James Rae, lead author of the paper and reader in the School of Earth and Environmental Sciences at the University of St. Andrews.

For the last one million years, CO2 levels slowly oscillated between 180 ppm and 300 ppm, as Earth’s climate transitioned in and out of the ice ages, with the dawn of agriculture and human settlement only establishing when CO2 and climate stabilized at the end of the last ice age, around 10,000 years ago, Rae said.

Understanding Ancient Atmosphere Using Tiny Ocean Organisms
“Societally, we all care about carbon dioxide in the atmosphere, and in paleoclimatology we have these methods to look at CO2 variations in Earth’s history,” Zhang said. “And in particular, these two-ocean marine-based methods are the two most common and arguably the most accurate. We used those two state-of-the-art methods, analyzed how they compare with each other, and looked at what history they inform us about for the last 66 million years.”

“These data allow us to see how CO2 has changed through Earth’s history, and the impact this has had on climate,” Rae said. “Over the last 66 million years we find that CO2 and global climate go hand in hand, with higher CO2 levels associated with dramatically different climates.”

chart graphic
At CO2 levels of around 1500 ppm, last seen about 50 million years ago, it was so warm that we find fossilized alligators in the Arctic, researchers say.
Courtesy of James Rae

“The alkenone method begins with biomarkers that were produced by algae millions of years ago, and these algae, like algae today, were photosynthetic – just like plants or trees on land,” Zhang said. “When these algae photosynthesize, they fractionate carbon isotopes. That process is determined by a number of factors, and one of them is the amount of CO2 available to them in seawater.”

These biomarkers leave a timeline of carbon levels, he said.

Samples were taken from cores of mud from the deep sea floor, where microscopic fossils and ancient molecules accumulate, preserving the history of CO2 and climate. By firing these ancient atoms through super sensitive instruments, scientists can detect the chemical fingerprints of past changes in CO2.

“The shells and molecules we measure capture the chemistry of seawater at the time they grow,” Rae said. “Over the last 20 years scientists have figured out how to use these chemical fingerprints to reconstruct how much CO2 was in seawater and the atmosphere above it.”

These methods have been the focus of the researchers’ various efforts for years, and together they aim for this paper to contribute to wider efforts to combine a broader range of paleo-CO2 proxies. Recent refinements to these methods now allow more accurate and precise reconstructions of the ancient atmosphere.

“This refined method produces CO2 estimates that are in line with the ice core-derived CO2 records over the last one million years,” Zhang said. “This gives us more confidence in extending the reconstructions to the entire Cenozoic era.

The last time CO2 was as high as it is today was three million years ago, Rae said, and it drove enough warming to melt all of the ice from Greenland and West Antarctica and raise sea level by around 60 feet.

“It takes time for global warming to catch up with CO2 levels, but the geological record shows us where we’re headed if we don’t use cleaner ways to get our energy,” Rae said.

UNESCO and the Internet Society announce strategic partnership to advance…