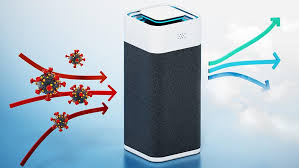 New Delhi: AIRA uses bipolar ionization, which releases both positive and negative ions into the air, catalyzing a chemical reaction on the virus’s membrane and essentially deactivating the virus.Getty Images
A team of Texas A&M University Students from the College of Engineering and the Mays Business School teamed up to create a portable air purifier to adress COVID-19.
Valentina Alarcon and Juan Cuellar from the College of Engineering and Leticia Gomes from Mays designed the prototype through Aggies Against COVID-19, a virtual design competition that invited students of all majors to identify and solve problems related to the pandemic. After placing in the top 10 teams, the group was admitted into the National Science Foundation’s (NSF) Innovation Corps (iCorps) Site Fellows program, through which they conducted customer discovery.
Called AIRA, the portable air purifier aims to use bipolar ionization, an emerging technology that kills viral particles by releasing both positive and negative ions in the air, catalyzing a chemical reaction on the virus’ membrane and essentially deactivating the virus. Studies have shown that bipolar ionization can reduce 99.9% of microbes, including COVID-19, in a matter of minutes.
“We wanted to address how COVID-19 is thought to be an airborne virus,” Alarcon said. “The goal was to create a portable device that wasn’t a mask – something that was simple to use and available to the general public.”
Alarcon, Cuellar and Gomes conducted 33 interviews with various professionals and individuals. They also conducted a random survey to determine the public’s perception of air quality. Survey results revealed that 67.6% of the respondents were concerned about air quality given the pandemic and that their primary locations of concern were schools and restaurants/bars.
It’s the team’s hope that AIRA could be especially helpful in crowded areas such as primary schools and universities.
Current air purifiers are either installed into a building’s heating, ventilation and air-conditioning (HVAC) system or they use what’s called negative ionization to filter the air. With negative ionization, negative ions are released into the atmosphere and latch onto contaminant particles such as pollen, allergens, bacterium and other toxins.
“Those particles then become so heavy that they fall to the ground,” Gomes said. “The issue with negative ionization is that the virus is never actually killed, and there’s no guarantee that particles will fall to the ground – they can also fall to the closest surface, whether that be a T-shirt, coffee table or handbag.”
Although the creators of AIRA would like to move forward with producing their design, they are currently hindered by technological barriers. There’s only one other company in the United States, AtmosAir, that implements bipolar ionization through the use of patented tubes that are installed into a home’s HVAC system. AIRA would require a similar mechanism on a much smaller scale, and the technology that AIRA needs to utilize bipolar ionization while remaining compact and portable is not in existence as of yet.

Institute Finds Ways to Celebrate Thanksgiving Together, But at a Distance