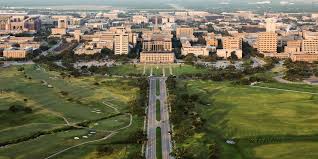 When Texas A&M University student veteran Max Kutch ’21 arrived home on Veterans Day, he got quite a shock – a backyard full of Aggie gear and other prizes, a surprise orchestrated by the university and Operation Hat Trick (OHT) with the help of his wife, Liz.

The family of four – including the couple’s two children, Cain, age 2, and Scarlett, 7 months – live in College Station. They’d been house-sitting for Kutch’s brother in the Hill Country when they arrived home to find that staff members from the Texas A&M Don & Ellie Knauss Veteran Resource and Support Center (VRSC) and the Division of Marketing & Communications had set up all the prizes in the family’s backyard.

The prize package included OHT-Texas A&M apparel, a tent, table and chairs, a projector and outdoor screen, a grill and Aggie football tickets, among other gifts.

a photo showing the prizes for Max Kutch including an A&M tent, apparel and an outdoor screen
The prize package included a variety of Aggie gear.
Billy Smith/Texas A&M Division of Marketing & Communications


A senior from Dallas pursuing his bachelor’s in basic exercise physiology, Kutch shared his delight with the surprise, saying, “I pulled up and saw the lights in the backyard and I wasn’t sure what was going on; I thought maybe we left the lights on,” he said. “But then we came in and saw all of it and I was totally taken aback. I thought, ‘Wow this is incredible, this is insane.’ I’m forever grateful, this is incredibly nice.”

Kutch transferred to Texas A&M after serving more than 12 years in the U.S. Marine Corps. He served as a scout sniper in Marine Special Operations Command and achieved the rank of staff sergeant before being medically retired in February 2018. He served honorably and completed six combat deployments to the far corners of the globe before his military career was cut short when the driver of a motor vehicle ran a stop sign and struck him.

He said the silver lining to his traumatic accident is that it provided the catalyst to pursue his dream of becoming a doctor of osteopathic medicine. He is a member of the Texas A&M Pre-Medical Society and the university’s powerlifting team. He is a full-time student with a current GPA of 3.51 at Texas A&M and 3.76 cumulative with the night school and online classes he took while on active duty. He is projected to graduate from Texas A&M in December.

The family was chosen to receive the prize package with input from staff at the VRSC, including Assistant Director Sgt. Maj. Donald Freeman (Ret.), who was on site for the surprise event.

“This is a tremendous opportunity for us,” Freeman said. “It’s our chance to give back and show the appreciation for all their hard work. Things like this boost veterans’ spirits and help them and their families know that people out there support them.”

a photo showing Texas A&M-OHT merchandise given to the Kutch family
Texas A&M has been partnering with Operation Hat Trick for the past four years to sell Aggie gear to raise money for wounded soldiers and veterans.
Billy Smith/Texas A&M Division of Marketing & Communications


OHT is a nonprofit organization that generates awareness, support and funding for the recovery of America’s wounded service members and veterans through the sale of OHT-branded merchandise, the proceeds from which are distributed to organizations throughout the country that support the OHT mission.

Shane Hinckley, vice president for brand development at Texas A&M, was also present for the event and said the university’s partnership with OHT over the past four years has led to many opportunities to positively impact the lives of Aggie student veterans.

“Operation Hat Trick is a great program that aligns perfectly with our core value of selfless service and the military-friendly nature of Texas A&M,” Hinckley said. “I couldn’t be happier than to be here to surprise Max and his family. I know there are others besides Max, and he’ll be the first to say the spotlight doesn’t belong on him. But he deserves it, his family deserves it and we’re excited to have this opportunity to give back for all he’s done for our country and our freedoms.”

Liz Kutch, who conspired with the Texas A&M team to surprise her husband, said she was truly blown away by all of the generosity and hard work that went into the event. “We’ll never forget it,” she said.