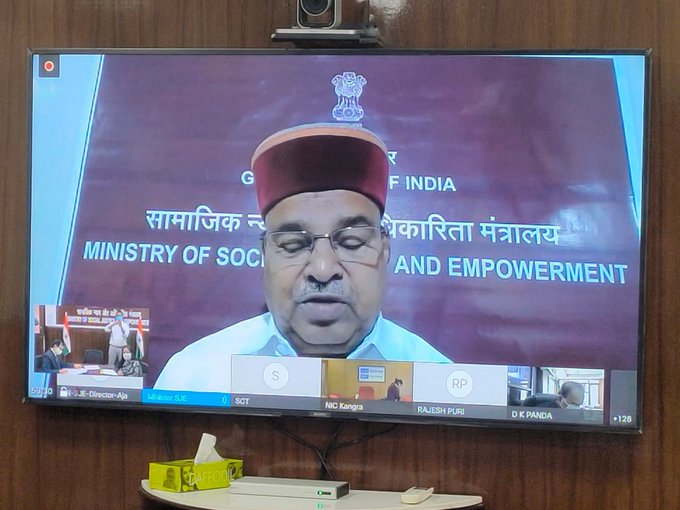 New Delhi: The fourth Meeting of the Central Advisory Board on Disability was held on 26.11.2020 under the Chairmanship of Dr. ThaawarchandGehlot, Union Minister, SJ&E through Video Conferencing. Shri Krishan Pal Gurjar, MoS, SJ&E and Vice-Chairman of the Board was also present in the meeting.

The Central Advisory Board deliberated on certain important issues in the disability sector namely, implementation of the RPwD Act, 2016, Accessible India Campaign, Unique Disability ID Project,early intervention and rehabilitation of children with disabilities, measures taken by the States/UTs for protection and welfare of PwDs during COVID 19, ensuring distribution of aids and assistive devices among Divyangjan under ADIP scheme during COVID 19 and implementation of the provision of reservation for persons with benchmark disabilities.

The Board also took note of the initiatives taken by the Central Government such as establishment of National Institute of Mental Health Rehabilitation and Centre for Disability Sports in Madhya Pradesh with a view to take care of rehabilitation of persons with psycho-social disabilities and to promote sports activities among Divyangjan.

The Central Advisory Board urged the States/UTs to appoint independent State Commissioners and constitute State Advisory Boards, if not yet done so, at the earliest. The States/UTs were also advised to submit comprehensive report on affirmative actions taken by them for the welfare of Divyangjan during COVID 19. The Board advised all the Central Ministries/Departments to take effective steps to implement the Accessible India Campaign on mission mode and finalise the accessible standards in respect of their sector(s) in consultation with Chief Commissioner for Persons with Disabilities within a period of six months and submit it to the Department of Empower of Persons with Disabilities for notification. The States/UTs were advised by the Board to create an online mechanism for maintaining data relating to vacancies reserved for persons with benchmark disabilities in a transparent manner and also conduct special recruitment drive to fill up backlog vacancies, if any.

The Ministers dealing with empowerment of Persons with Disabilities of States/UTs or their representatives from about 34 States/UTs, representatives from concerned Central Ministries/Departments, National Institutes and other Central Government organisations and non-official members of the Board participated in the meeting.