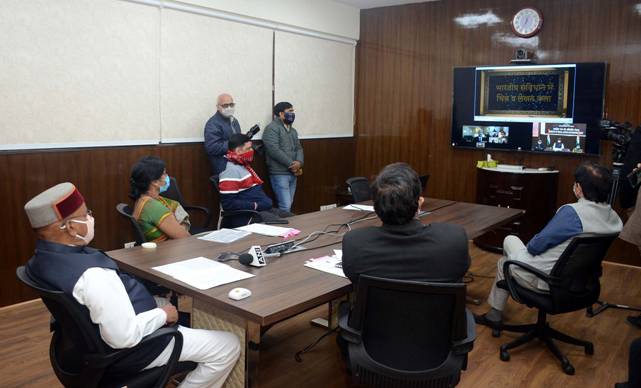 Addressing on the occasion, Shri ThaawarchandGehlot said that the Government of India has decided to celebrate the yearlong ‘71st Constitution Day’ on 26th November, 2020 and the Ministry of Social Justice and Empowermentwas given the responsibility of being the nodal ministry for this event. Dr. Ambedkar International Center (DAIC) under Ministry of Social Justice and Empowerment had organized many programs throughout the year to make yearlong celebrations of the Indian Constitution a success. These include organizing lectures on Dr. Ambedkar and the Constitution and also producing a documentary on the Constitution titled: “Illustrations and Calligraphy in the Constitution of India”.This is a documentary citing the relevance of the varied illustrations used in the Constitution with their respective parts. It is an attempt to study the Constitution taking a very unique approach, the Minister added. Shri Gehlotcomplimented the team DAIC for producing a wonderful and unique Documentary.

Dr. Ambedkar International Centre which is an autonomous body under Ministry of Social Justice & Empowerment has conducted a detailed research on illustrations and calligraphy in the Constitution of India and prepared this film. The original Constitution documents has been handwritten and hand-painted consisting of several illustrations, paintings and murals depicting Indian history, culture and traditions. The original paintings on the Constitution document have been done by the painters and scholars of Vishva Bharati, Shantiniketan. The research team in DAIC has, after extensive discussions with academicians in Vishva Bharati linked the pictures/murals on the Constitution to various events of Indian history, traditions and culture. This exercise has resulted in this film, the film is also given to the Doordarshan for screening on 26.11.2020.