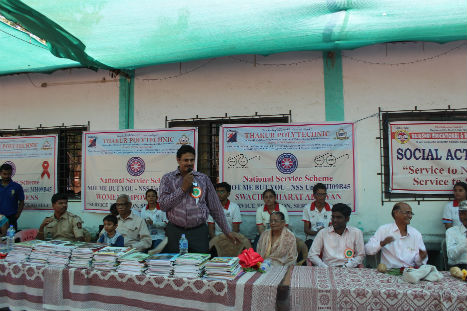 The Residential Camp witnessed an impressive participation of 60 NSS volunteers, which included 21 girls and 39 boys.

In a bid to be socially responsible, Thakur Polytechnic, through the Camp, undertook a number of CSR and welfare initiatives like educating and creating awareness among people about the harmful effects of using plastic, conducted Road Safety awareness drive, and also held a Peace rally.

As part of its anti-plastic rally, the volunteers educated people on why plastic is poison, and how it is affecting our environment and to us. They later distributed environment friendly cloth bags among the people in the market.

Collected old clothes (albeit in good conditions), and blankets were also distributed among the villagers.

Projects of eight Girl Innovators to be presented before the…

To pique the interest of the villagers a Cultural program was held which included dancing, singing and the performance of a skit. In addition, Sport activities were also conducted for tribal school children.

With medical facilities mostly lacking in the village, medical check-up of 400 school children were conducted by a team of 15 doctors, and donation of stationery material was made to the village school.

To contribute to the government’s relentless agenda on a clean India, the camp organised Swach Bharat Abhiyan on Gholwad beach and Gholwad’s police station.

Talking about the Camp, Dr. S. M. Ganechari, Principal, Thakur Polytechnic, said, “At Thakur Polytechnics, we believe in giving back to society, especially the economically and socially weaker section of the society, and creating a better life for people. Through this Camp we tried to do exactly that. Through our initiatives we hope we have achieved a little bit of it.”