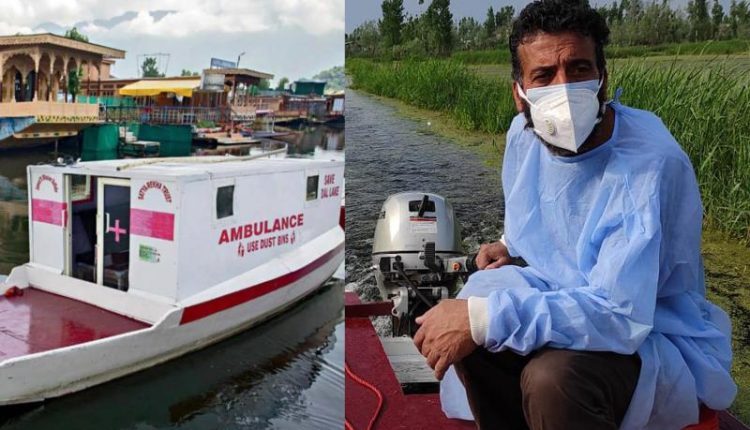 SRINAGAR: Necessity is the mother of invention: it holds true for Tariq Ahmad Patloo, whose struggle in getting timely transportation to the shore of Dal lake during his covid illness, prompted him to design his own Shikara as a water ambulance in order to ferry patients like him to Dal Lake’s shore.

“I extend my gratitude to PM Modi Ji for mentioning my efforts during his programme ‘Mann Ki Baat”. The appreciation from him is a great honour and means a lot for me. I hope the mention of my work in the programme will benefit my community who face a lot of problems during the ongoing pandemic,” he said.

While mentioning Patloo and his floating ambulance PM Modi said that there are many people in our country who have come forward and worked to help the doctors and he has come to know about one such attempt from Srinagar.

The PM added that a campaign is also underway to make people aware of this ambulance, and continuous announcements from the ambulance are also being made by him. “The effort is that people should wear a mask and undertake other necessary precautions too, he said.

Patloo, who contracted the coronavirus during the first COVID-19 wave in August last year, faced a lot of difficulties to reach the hospital from Dal waters.

After quarantining himself during the initial days, however, his health deteriorated he was shifted to SMHS Hospital for treatment.

“I felt helpless in reaching the shore of Dal Lake and to further reach the hospital. It was a difficult time for me and my family,” he recalled.

This incident etched in his mind for good as he decided to make a boat ambulance to ferry people who might need it during covid illness or any other.

“While recovering at a bed in the hospital I kept thinking about how to make a floating ambulance for all the Dal dwellers who are in need of this kind of facility,” he said.

Though he didn’t blame anyone as people were scared to come in contact with an infected person, but the incident gave him a lifelong lesson to help people who are in dire need during the health crisis.

After getting discharged from the hospital, Patloo’s sole objective was to design a floating ambulance for which he got some help from an NGO providing him equipments.

“I have a dream to do something big for my community who has suffered a lot in the past three decades. Now, my next step is to make a fire service boat for the people living in Dal Lake,” Patloo said.

Anantnag receives appreciation from MoSJE for commendable work under NMBA