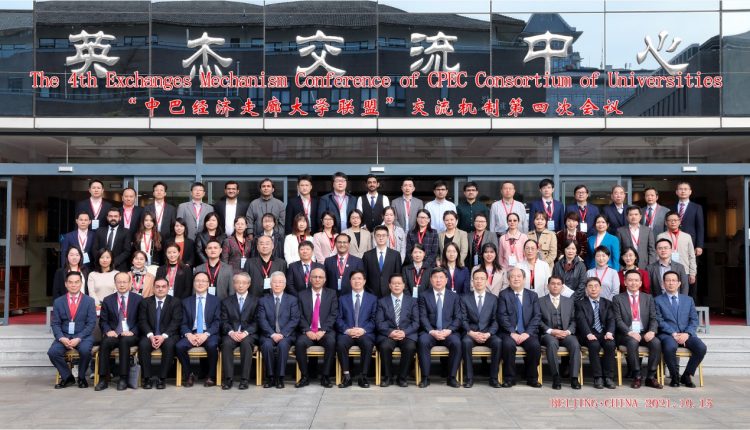 Peking University, October 21, 2021: The 4th Exchange Mechanism Conference of the China-Pakistan Economic Corridor (CPEC) Consortium of Universities was held on 15 October 2021 in a hybrid online-offline ceremony at both Peking University and the National University of Sciences and Technology.

The conference was attended by Qiu Shuiping, chair of Peking University Council; Du Yubo, president of the China Association of Higher Education; Shafqat Mahmood, minister of Federal Education and Professional Training of Pakistan. Pakistani and Chinese student representatives from 82 member universities of the CPEC Consortium of Universities and Pakistani international students at Peking University were also present at the conference.

On behalf of the China Association of Higher Education, Du Yubo began his keynote speech by expressing that it is of positive significance to hold the 4th Exchange Mechanism Conference of the CPEC Consortium of Universities at the historic moment of the 70th anniversary of the establishment of diplomatic relations between the two countries. He hoped that all parties could continue to make greater contributions to building a closer China-Pakistan community in the future by promoting greater cooperation in key areas, promoting the development of science and technology-related education, promoting people-to-people exchanges and promoting the integration of industry and education.

Shafqat Mahmood, representative of the Ministry of Education of Pakistan, expressed his gratitude towards the Chinese government and fellow colleagues for their support of Pakistan’s economic and social development. He stated that this meeting served as an important witness to the friendly cooperation between China and Pakistan, and was a flagship project of people-to-people and cultural exchanges within the China-Pakistan Economic Corridor, proving that countries with different cultural backgrounds can still carry out friendly people-to-people and academic exchanges.

Qiu Shuiping, on behalf of Peking University, expressed his congratulations towards the commencement of the conference. He pointed out that the friendly exchanges between China and Pakistan were steeped in history, and the friendship between the two countries have long been deeply rooted within the hearts of both the Chinese and Pakistani people. He expressed his hope that this conference would allow both the Chinese and Pakistani academic circles to gather consensus on major theoretical and practical issues, widely disseminate the concepts of peace, rationality, tolerance and mutual trust, and work together to create a better future for people-to-people and cultural exchanges.

Other distinguished guests gave keynotes speeches. They expressed their hopes to promote the high-quality development of international exchanges and cooperation in innovation, high education and the construction of the China-Pakistan Economic Corridor between the two countries.

The conference also saw the inauguration of the establishment of the China-Pakistan Higher Education Research Institute, as well as the launch of the Institute’s learning platform and the release of the 2019-2020 development report on the Exchange Mechanism of the CPEC Consortium of Universities

Later in the afternoon, 16 Chinese and Pakistani experts and scholars also delivered reports at two sub-forums with the themes of “Promoting High Quality Development of China-Pakistan Higher Education Cooperation” and “Post-pandemic Opportunities and Challenges of China-Pakistan ‘Water-Food-Energy Security Network”.