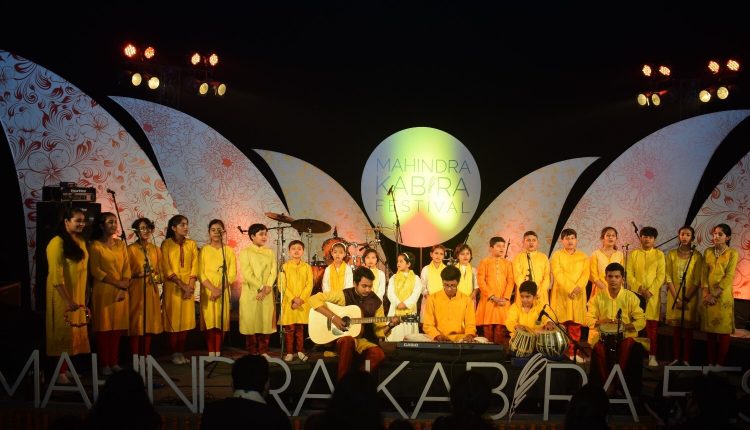 New Delhi : After two days of celebrating Kabir and his teachings through a wide range of performances, the Mahindra Kabira Festival 2021 ended on an exuberant note. The concluding day explored the glorious simplicity of Kabir’s philosophy through mystic melodies and music.  The performances showcased the coexistence of art and spirituality.

Sharing his thoughts on the Festival, Jay Shah, Vice President, Head – Cultural Outreach, Mahindra Group said, “The Mahindra Group is proud to be able to revive the Mahindra Kabira Festival and give artists and audiences a chance to interact again in a physical setting. This joy and a sense of relief was palpable throughout the course of the Festival and we are happy to once again be the frontrunners of such a revival. We hope to continue to bring moments filled with bliss and reflection as we plan for the future.”

Sanjoy K. Roy, Managing Director, Teamwork Arts said, “As we bade adieu to Varanasi at the end of yet another immersive Mahindra Kabira experience in 2019, who would have known that the world as we knew it would change forever? Old paradigms have given way to new avenues of renewed energy in the face of all odds. What has remained constant is the ability of human beings to adapt and move forward as reflected by Kabir’s philosophy.”

Opening the Morning Music, Varanasi-based classical vocalist and teacher Prateek Narsimha presented devotional bhajans of Kabir about Kabir’s wisdom, namely: Nar Te Kya Puraan Padh Keenha and Maaya Maha Thageenee Ham Jaanee. His performance also included Raag Nut Bhairav and Drut Khayal. This breathtaking performance was followed by some vibrant numbers by The Aahvaan Project. The artists created conversations around Kabir promoting the philosophy of love, humanity and kindness through stories of everyday lives based on Kabir’s words. Vedi Sinha of Aahvaan Project said, “The reason I sing is so that I can share stories with others through my music. ‘Kabir, Tum Kahan Ho’ is a conversation that a little girl is having with elders around her. In the conversation, the girl is trying to ask the elders about love, and why we are unable to find it in our everyday lives.” Speaking on Kabir, Sinha said, “Be it whichever time or era in any society, the philosophy of Kabir always resonates as it is a universal philosophy.”

In the afternoon session, musician, storyteller and author Raman Iyer presented his reflections on a few verses of Kabir to understand work-life balance. Alongside Anjali Singh Padiyar and Labansh Bhardwaj from the Delhi-based band Mantash.  Iyer used stories and & songs to discuss modern-day work pressure. He said, “Kabir’s verses helped me in finding answers to many questions like: How to give 100% without over-working? How do we differentiate dedication from a workaholic lifestyle? What’s the difference between ambition and greed?” They also paid a tribute to the late musician Valentine Shipley by performing a medley composed by him.

In the following session, Tarannum Se Kabir, Askari Naqvi showcased a unique style of musical rendition. ‘Kabir in Tarannum’ (Tarannum means composition) was a mixed bag of the well-known poems of Kabir and some rarely performed musical pieces. “Kabir is free of everything and did not believe in any structure. My singing style of Kabir’s words is also without any structure and absolutely free-flowing.” Naqvi said. Starting his performance with Kabir’s doha, Pinjar Prem Prakasiya, Naqvi included Dhuns and Ragas belonging to Varanasi that explained what Kabir thought of Ram, life and death, love and knowledge.

Evening sessions commenced with Niranjali by DPS Varanasi Choir. A musical performance by school children from all age-groups was presented in the form of a medley of the original dohas of Kabir. Mukesh Shelar, Principal, DPS Varanasi said, “The name Niranjali for the session was chosen because its suits the philosophy of Kabir. Our teachers and students chose such dohas of Kabir which have not been available to the audience. The choir composition is totally self-composed and we have chosen various styles for it. The performance included traditional dohas of Kabir, fusion and Sufi style music.”

As the glorious sun set into the Ganga, the Festival moved towards the Evening Music programme with musical pieces showcasing songs from ‘Kabira Khada Bazaar Mein’, a masterpiece by M.K. Raina and a modern reinterpretation of Kabir’s poetry. Sharing his thoughts on the session, Raina said, “To present the music of the play Kabira Khada Bazar Mein in a new form is a matter of pride for all of us in the city of Kabir, that too on the banks of the Ganges. These verses of Kabir, which Kabir wrote in the 14th century, are still alive and meaningful and give us solace. It was presented in a new form of Dastangoi. It was very difficult to do this play in a new way. We worked on it morning and evening for one month. We have paid full attention in our performance so that Kabir’s dohas do not get suppressed and have tried to bring them alive.” Commenting on the musical piece, Arainanirban Ghosh of art-rock project Dastaan Live said, “The Mahindra Kabira Festival held immense importance with regard to the celebration and reinterpretation of the works of Kabir. The performance concentrated on few of the songs from the act by M K Raina and was delivered it in a modern and contemporary way. The few songs that were chosen for the evening were – Sadhu Dekho Re Jab Maurana; Jab Bhula Re Bhai; Naam Hai Dharmi Adharmi; Moko Kaha Dhunde Re Bande; Humar Ram Raheem Kareema.”

The grand finale of the Festival was a performance by Hindustani classical vocalist Kalapini Komkali. Performing in style of Zikr, she introduced the audience to how the people of Malwa view and love Kabir.  She performed Kaun Thagwa Nagariya Lutal Ho, and Sunta Hai Guru Gyani, two of Kabir’s very famous bhajans. Komkali said, “I am very thankful to the Festival for inviting and giving me this opportunity and what can be better than sitting in front of Ganga Ma and sing and listen to Kabir.”

With a song in its heart, the 5th edition of Mahindra Kabira Festival concluded with performances and memories to be cherished.  The Festival bade us adieu, promising to return to the ancient city of Varanasi with its next edition and bring Kabir even closer.