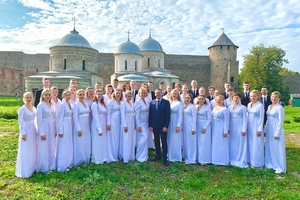 On August 28-29, the Academic Choir of PetrSU took part in the Second Choir Festival in Ivangorod.
The program was intense, for 2 days several dozen choral groups performed at the walls of the fortress with solo programs. A gala concert with a symphony orchestra of the Leningrad region and a concert performance of the last opera by P.I. Tchaikovsky “Iolanta”.

It is very honorable and exciting to represent the Republic of Karelia and our university at such a large-scale festival of choral singing.

We were really looking forward to this trip, it opened our 60th anniversary season,

PetrSU student – participant of the Summer School of Polish Language, Literature and Culture