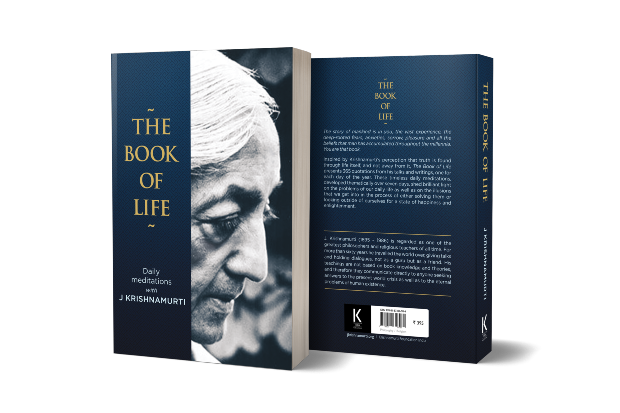 Mumbai: Krishnamurti Foundation India (KFI) has published The Book of Life: Daily Meditation with J.Krishnamurti, a book of specially chosen quotations from over three decades of public talks, writings and discussions of J. Krishnamurti, one of the greatest religious teachers of all time.

The pandemic has affected all our lives, and for many this has triggered introspection. The impermanency of life on the outside is a reality that requires a fresh response. As we adjust to a new ‘normal’, there is a need for a deeper understanding of ourselves and how we respond to the crisis in a meaningful way. More than 50 years ago, J. Krishnamurti, pointed out the looming crisis facing humanity in a way that resonates with our modern age sensibility. Speaking to an audience four decades ago, he said: “The world is always close to catastrophe. But it seems to be closer now. Seeing this approaching catastrophe, most of us take shelter in idea. We think that this catastrophe, this crisis, can be solved by an ideology.”

For close to sixty years, Krishnamurti traveled the length and breadth of the world speaking to a wide spectrum of people as he unravelled, with great precision, the workings of the human mind with its desires, fears, anxieties, suffering, and the incessant pursuit of pleasure. In The Book of Life, he says: “The psychological protection of oneself—that is, the desire to be always certain—breeds fear. A mind that is seeking always to be certain is a dead mind, because there is no certainty in life, there is no permanency.”

The Book of Life is a finely tuned, unique compilation of quotations built around themes of daily living that any human being can relate to. Themes such as Relationship, Love, Desire, Fear, Learning, Authority, Sex, Feelings, Energy, Attention, Marriage, Passion, Truth, Reality, Time, Knowledge, God and Meditation. There are a total of 48 such themes with four themes explored each month. The easy-to-read design, where each page has one quote for one day, allows the reader to open any page and get illumination on a particular theme for that day.

Speaking on the launch of the book, Vishwanath Alluri, Secretary of KFI, says: “The Book of Life was released in 1995 in the West, but it is for the first time KFI is publishing the book for the young Indian reader who has not been exposed to Krishnamurti and the teachings. What Krishnamurti taught and explored for more than sixty years from 1925 to 1986 is extremely relevant to our crisis-ridden times. What he spoke and wrote about the human condition is something anyone—young or old, man or woman, rich or poor, from any nationality or religion, can relate to. As we look forward to the new year, this book can help herald in a new beginning and a fresh outlook on living.”

The book is available on Amazon, Flipkart as well as on wwwkfionline.org, the KFI website.

J. Krishnamurti (1895 – 1986) is regarded by many as the most significant voice of our times and as one who has a most profound impact on human consciousness. Born in Madanapalle, Andhra Pradesh, he travelled constantly around the world, giving talks to thousands of listeners, writing, holding discussions with the brightest minds of the century, or sitting silently with those who sought his compassionate and healing presence.

Sage and religious teacher, Krishnamurti illumined the lives of millions the world over – it is estimated that he talked to more people in recorded history. More than three million copies of his books have sold worldwide. His material legacy, consisting chiefly of video and audio recordings of his talks and dialogues, is vast.  These dialogues and talks can be accessed at his official channel https://www.youtube.com/channel/UC88A5W9XyWx7WSwthd5ykhw

Krishnamurti set up four foundations – one each in India, United Kingdom, United States ,and Spain to preserve and make available for posterity his teachings without any distortion.

Education that would bring about a human being with a radically new consciousness was close to Krishnamurti’s heart. He set up schools in India, UK and USA. Today, the Krishnamurti Foundation India (KFI) runs six schools – Rishi Valley school (Madanapalle), Rajghat Besant School (Varanasi), Valley School (Bengaluru), The School-KFI (Chennai), Sahayadri School (Pune) and Pathashaala school (near Chennai). Each of these schools has a study centre that is open to anyone wishing to engage with the teachings.

The Krishnamurti Foundation India is located at the Vasanta Vihar in Chennai. This used to be Krishnamurti’s home when he toured India. Today, it houses a study centre, a library, a bookstore and an archives of the original teachings.