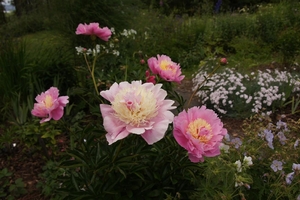 The Botanical Garden of PetrSU appeared 70 years ago

On February 1, 1951, in Karelia, on the outskirts of Petrozavodsk, on the shores of Lake Onega, among rocks and coniferous forests on the picturesque southern slopes of ancient volcanoes, the Botanical Garden of Petrozavodsk State University was founded.
Just half an hour drive from the city center – and you find yourself in a picturesque natural corner away from the hustle and bustle of the city, and urbanization. From the high cliffs a panorama opens up overlooking Lake Onega and the city of Petrozavodsk.

The picturesque ridge landscape is formed by unique geological structures that reflect the history of the region since the Proterozoic era. On the vast (more than 330 hectares) natural territory of the garden, the ecosystems of the taiga zone are preserved, more than 400 species of vascular plants grow, 172 – mosses, 263 – lichens.

The garden’s collections include more than 1500 species, forms and varieties of cultivated plants of the temperate zone of the Northern Hemisphere. In the parterre there are expositions of herbaceous plants – “Shadow” and “Solnechny” gardens, rockery, herb garden, small expositions of phlox and daylilies, a young rhododendrarium under the crowns of pine trees. The most interesting forms and varieties of woody plants are collected in the “Decorative Arboretum” exposition. Geographic collections of woody plants over 60 years old can be viewed in a beautiful 12 hectare park. Among the expositions of fruit and berry plants, the most attractive “Yablonevy Orchard”, numbering almost one hundred varieties of apple trees.

Employees and students of Petrozavodsk State University, as well as all residents of Petrozavodsk, are well aware of the Apple Blossom holiday, which has been held annually in the garden since 2014. On the eve of summer, the garden is filled with the magic aroma and color of apple trees. At the end of August, the harvest of surprisingly tasty and healthy fruits begins to ripen.

The apple orchard is a symbol of a long and persistent work on the introduction into cultivation and selection of the most resistant varieties in the north. The collection of domestic apple trees was laid in the first years of the foundation of the Botanical Garden. At this time, I.M. Politova (Pelgonen) under the guidance of Associate Professor of Botany Department, Ph.D. M.M. Izergina. By 1959, there were already 87 varieties of domestic apple trees in the garden, the first Michurin varieties were planted. The methods of grafting apple trees were mastered, phenological observations were carried out, winter hardiness, productivity, resistance to diseases and pests were assessed, seedlings were grown for sale. I.M.Politova defended her first Ph.D. thesis on variety testing and biology of fruit crops.

For many years, the team of the Botanical Garden has actively worked together with the faculty and students of the Department of Botany and Plant Physiology. As part of the research direction “Biological characteristics of introduced plants in the North” there was a section on fruit plants.

Since 1970, the collection of apple trees has been supervised by the director of the botanical garden P.V. Krupyshev. During these years, 488 apple trees belonging to 116 varieties grew in the garden. The biochemical composition, the content of microelements and vitamins in fruits were investigated, in 1975 a Ph.D. thesis was defended, including a section on the home apple. As a result of the research, it turned out that in terms of the content of biologically active substances, the fruits of our northern apple trees are not inferior, and even surpass the imported southern ones.

In order for apple trees to develop well in the conditions of Karelia, it was necessary to select stable rootstocks, for which winter-hardy natural species of apple trees and seedlings of domestic apple trees were used. This work, as well as variety testing and intravarietal variability of the apple tree, was carried out by an employee of the garden, P. M. Kurkhinen.

The weather conditions made their own adjustments to the systematic scientific research of apple trees in the conditions of Karelia. In the harsh winter of 1986-1987, when the temperature dropped to -42 ° C with low snow cover, the first collection of domestic apple trees in the Botanical Garden was lost. The new collection was founded in a warmer area, where it is located now.

In the difficult 1990s V.M. Kovyaka managed to preserve the collection of fruit and berry crops, creating on its basis a research and production nursery, which largely ensured the survival of the Botanical Garden in the period from 1993 to 1997. Later, the department of fruit and berry plants was supervised by Ph.D. T.I. Kirilkina. The gardeners of our city have well remembered Tatyana Ivanovna’s lectures on the Open University program, excursions and practical classes in the Botanical Garden dedicated to biology, agricultural technology and tasting of fruit and berry crops.

Currently, the collection of domestic apple trees has more than 50 varieties, including the well-known time-tested folk varieties ‘Borovinka’, ‘Grushovka Moskovskaya’, ‘Papirovka’, ‘Kalvil White Letniy’, varieties of VNIIS named after I. V. Michurin ‘Medunitsa’, ‘Cinnamon New’, American ‘Melba’, ‘Welsey’ and others, as well as some Siberian, Ural and Finnish varieties. In recent years, new promising varieties for Karelia have come from VNIIR (St. Petersburg). New varieties of apple trees from the foothills of the North Caucasus are being tested, breeding by N.I. Drachev and other breeders.

Much attention is now paid to the cultivation of ornamental species and varieties of apple trees, among them the apple tree ‘Hvingiensis’ with an original umbrella-shaped crown, the forest apple tree (a large tree, decorative at the time of flowering), the Sheideker apple tree (decorative hybrid species), the home apple tree’ Pionerka ‘and’ Royalty ‘with pink flowers and leaves. All of these plants are favorite objects of photo shoots in the garden and potential material for decorating personal plots and urban landscaping.

Ural federal university: A Bridge to Chinese Culture, Confucius Institute at UrFU Is One of the Best In the World