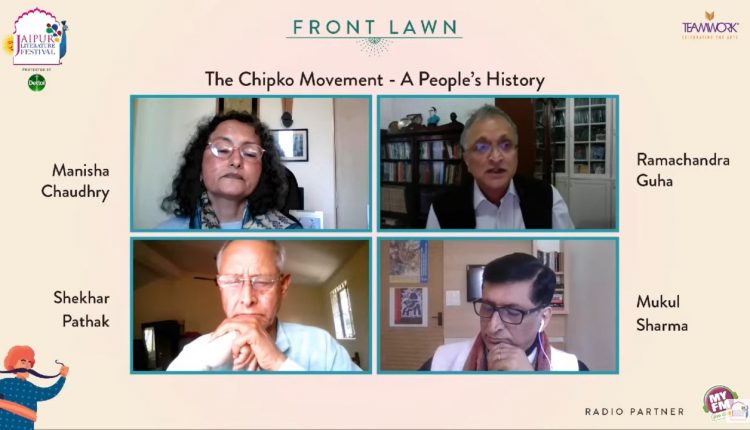 The Jaipur Literature Festival 2021 hosted a session on Shekhar Pathak’s new book ‘Chipko – A People’s History’ that maps the journey of the people of Uttarakhand and a century of peaceful agitations to fight for the very survival of their habitat and their existence. The session featured Ramchandra Guha, historian and author of the book, Shekhar Pathak and Manisha Chaudhry in conversation with writer and journalist Mukul Sharma.

The session focused on recent natural disasters in Uttarakhand, including the floods in Nanda Devi Sanctuary in February 2021, tying it back to issues like deforestation and urbanization that have been rampant over the last few years.

Shekhar Pathak, spoke about the continued indifference from state and industry towards the clear and present danger. The session discussed difficulties faced by villagers and local residents whose livelihood and homes are in the areas that are frequently in the front line of rapacious deforestation, damming of rivers and cutting into mountains for roads.

Ram Guha’s introduction to the book showcased the respect he has for the dedication and scholarship of Pathak. Praising Pathak’s work, Ramachandra Guha says, “Pathak focuses on the ordinary, often unlettered, men, women and children who shaped the forest rights struggle.”

Penguin Random House: PRH to Publish “THE 1619 PROJECT: A…

The James Berry Poetry Prize for emerging poets of colour

Calling the century-long history of andolans in Uttarakhand “a panoply of agitations”, Guha talks of the 1940’s Salt Satyagraha in the hills to support the national Salt Satyagraha led by Gandhi, the Statehood movement for Uttarakhand and many more.

“In India, the modern environmental movement was inaugurated by a grassroots struggle, the Chipko Andolan, in 1973. Chipko attracted worldwide attention because of its innovatively non-violent techniques of protest because it was led by Gandhians, because many of the participants were women, and because it took place in the Himalaya, a place of deep symbolic and spiritual significance” Guha said.

Manisha Chaudhry, spoke about her translating this work, and how it helped her reconnect to Uttarakhand where she had spent her growing years. She spoke particularly about Pathak’s foregrounding the contribution of women which was so important, especially with her own engagement with feminism. Chaudhry’s final summation on Pathak is that of a master – Historian, Chronicler, Observer, Participant and Scholar.

The session was thought provoking and questioned the viewers about their understanding the ecological importance of the Himalayas and the impact deforestation and other aspects of urbanization has on the fragile ecosystem.

The Jaipur Literature Festival 2021 is taking place on an exclusive virtual platform till 28th February 2021.

Chai, Chai: Travels in Places Where You Stop But Never Get Off

The James Berry Poetry Prize for emerging poets of colour