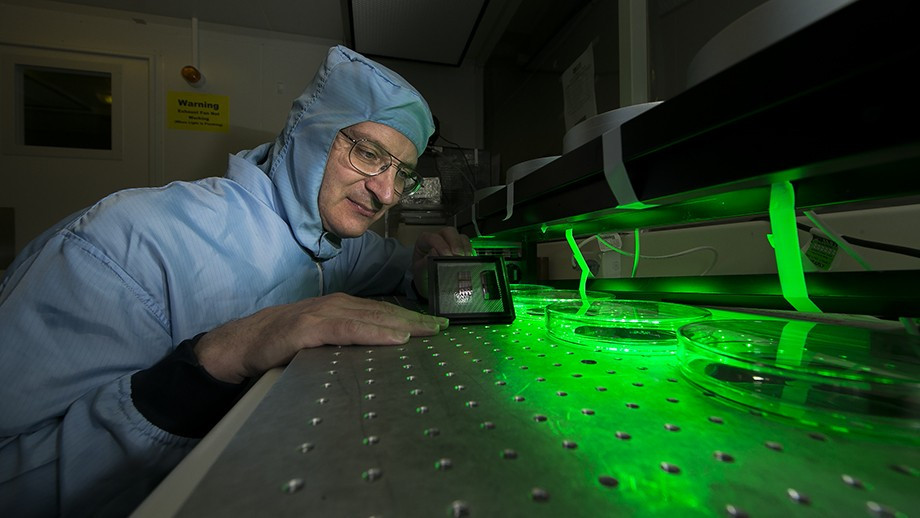 The chips stack up for Eureka prize winner

A scientist from The Australian National University (ANU) is part of a team that’s won the top prize in Australian science for their work on next-generation technology.

Associate Professor Steve Madden and his colleagues from The University of Sydney have been awarded the Eureka Prize for Outstanding Science in Safeguarding Australia.

The team’s work is combining the power of light and sound to create a microchip used by defence platforms.

Their long-running collaboration could also play a key role in 5G and other future wireless technology.

“Together we hold a long string of world first results that cannot be achieved with conventional electronics.

“This is not a ‘flash in the pan’, but the result of research spanning a 16 year timeframe. This enabled us to overcome long standing fundamental and arduous materials science challenges to make practical real world devices rather than just research lab curiosities.

“The work is now acknowledged as a viable new technology by industry and partly supported by large organisations such as L3 Harris and Lockheed Martin. It demonstrates the real value of ongoing funding and we are incredibly grateful to the ANU and the Australian Research Council for affording us this opportunity.

Known as the “Oscars of Australian Science”, the Eureka Prize winners were announced at a virtual ceremony on Tuesday 24 November.

Two other ANU researchers, Professor Michelle Coote and Professor Sarah Legge, were among the finalists.

Professor Coote and the Invisible Catalyst Team were shortlisted for the Eureka Prize for Scientific Research for the third year in a row.

Their work has shown that electric fields can be used to manipulate chemical reactions. This discovery could enable greener and safer methods for fabricating materials, from drugs to plastics.

Professor Sarah Legge is co-leader of the Cat Ecology, Impact and Management Team, a finalist for the Eureka Prize for Applied Environmental Research.

The group from the Threatened Species Recovery Hub of the Australian Government’s National Environmental Science Program was recognised for their work on understanding and managing the impact of cats on Australian wildlife.

You can find more information about the prizes here: https://australian.museum/get-involved/eureka-prizes/.

Kyushu University : The Strategic Information and…