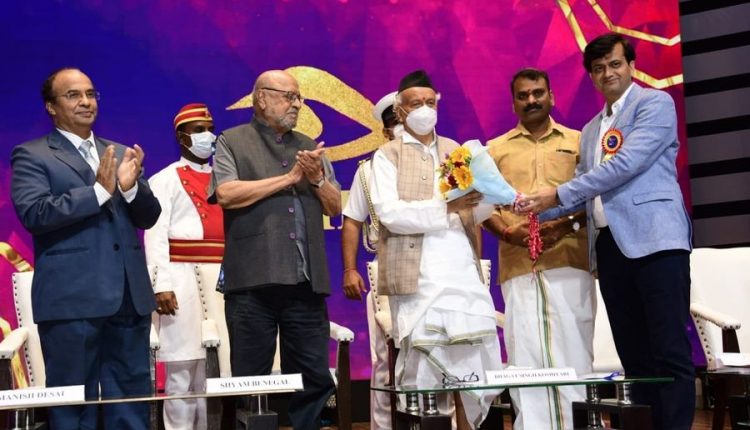 Mumbai: The curtains fell on the week-long Mumbai International Film Festival (MIFF) at a gala ceremony this evening.
The top awards in MIFF 2022 for Documentary, Short Fiction and Animation Films were presented by the Governor of Maharashtra Bhagat Singh Koshiyari at the valedictory ceremony held at the Nehru Centre in the presence of Minister of State for Information & Broadcasting Dr. L Murugan and other dignitaries.
Addressing at the closing ceremony Governor Bagat Singh Koshiyari said even though his field is different, he loves Art and Culture.
Minister of State for Information, Dr L Murugan said that in the last seven days 100’s of short film and non feature films were screened. Every person who works in a documentary film is a superstar. He remarked that short films are short in time but give big message.
The Dutch documentary film “Turn Your Body to the Sun” has won the prestigious Golden Conch award in the International Category in MIFF 2022. Directed by Aliona Van der Horst, ‘Turn Your Body to the Sun’ brings to light the incredible life story of a Soviet soldier of Tatar descent, who was captured by the Nazis during World War II.
Polish film– The Prince In Pastry Shop won the Best Animation film in the International category. In the best short fiction category the prize was shared between the Brother Troll and Indian film Saakshatkaram.
The Award for the Best National Animation Film, was bagged by Kandittaundu directed by Adithi Krishnadas. Gerupatra won the Best National Short fiction film, whereas, Aimee Baruah directed The Screaming Butterflies won the Best National Documentary. The Best National Documentary film above 60 minutes was won by “Admitted”.

India Education Diary Bureau Admin Jun 5, 2022
REASI : Under the able aegis of NALSA and as per the Action Plan issued by the J&K Legal Services…