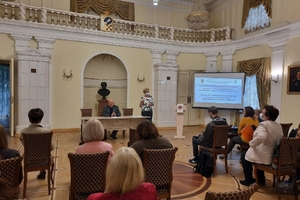 The educational aspect in the system of ethnocultural education of the Republic of Karelia!

The National Museum of the Republic of Karelia hosted a meeting of the section “The educational aspect in the system of ethnocultural education of the Republic of Karelia” of the republican August social and pedagogical forum.
The meeting was attended by teachers and graduates of the Department of Baltic-Finnish Philology, school teachers in Petrozavodsk and districts of Karelia, representatives of the mass media of the Republic of Kazakhstan, museum workers. The meeting discussed the possibilities of the National Museum as a scientific and cultural platform for teaching native languages, fostering interest in the history and culture of the native land.
Employees of the National Museum and its branch in the village of Sholtozero held a conversation and a mini-excursion, during which they introduced the section participants to the museum’s expositions, the possibilities of interactive cognitive activities for students of universities, schools and kindergartens.

PetrSU students and staff took part in an expedition to Gridino

University of Birmingham: Professor Uekotter discusses calls for Germany to return to…

iednewsdesk Jun 22, 2022
Scientists at the University of Birmingham have invented a new method to encourage bacteria to form…

University of Wisconsin-Madison: Mnookin gets a Madison preview