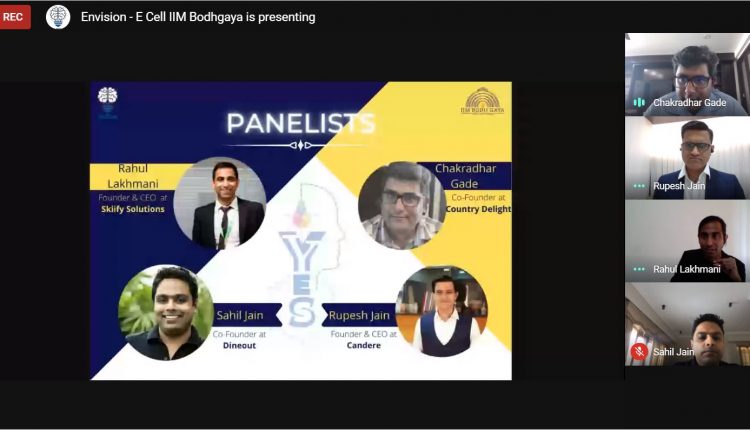 Bodh Gaya: Envision – The Entrepreneurship and Industrial Relations Cell of IIM Bodh Gaya conducted YES 2021, over the course of last week. YES, Youth Entrepreneurship Summit, is the annual flagship event of IIM Bodh Gaya aimed towards the inculcation and development of the very spirit of entrepreneurship. The institute’s E-Cell comes up with the yearly affair to stir the essence of teamwork and synergy among the masses. YES is a great opportunity that cultivates and nurtures numerous ideas every year and provides a platform for the youth to exchange their ideas with their corporate idols, thus gaining insights and lessons about the world of business and entrepreneurship in return.
The summit was organised with NABARD and Live Long Wealth as its Title and Co-Title Sponsor, respectively, with other collaborations being Boudhik Ventures, LWT Academy, The Startup Lab, Hostel Fund and Skiify.
This year’s edition commenced on 1st March 2021 with ‘Sampradaa – A Stock Trading Competition.’ The two-day competition was preceded by a mentoring session by Mr. Hari Prasad, CEO, Live Long Wealth. It gave an opportunity to all the stock market enthusiasts of the institute to participate and also proved to be a great learning experience for beginners.
The Summit’s first day began, on 6th March, with a session by the keynote speaker Mr. Sandil Srinivasan, CEO, Appveen. Mr. Srinivasan emphasised on the importance of time, commitment and desire for the growth of any start-up, highlighting that entrepreneurship is “not a one time sprint but a marathon” and requires consistent effort from the entrepreneur. The session was carried forward by a panel discussion by Mr Rahul Lakhmani, Founder & CEO, Skiify Solutions, Chakradhar Gade, Co-founder, Country Delight, Sahil Jain, Co-founder, Dineout and Mr. Rupesh Jain, Founder & CEO, Candere. They discussed how the growth of Indian Startups can be accelerated and how digital is not only a new trend but a requirement to sustain in today’s market.
A month-long journey that started in February 2021, on Dare2Compete had four stages – AARAMMBH, DAKSH, PRAYOJAN and KURUKSHETRA. They were rounds to introduce ideas, workshops on Business Plan Pitch, video pitch and the finale round, respectively. Kurukshetra – The Startup Hunt competition was held on the latter half of the first day, where the top 10 teams, selected over the course of one month and three rounds, took part in the pitching session. The teams presented their business plan in front of the panel of industry experts, venture capitalists and investors across the country. They pitched in their detailed and structured business plan in the form of a short video, live demonstration and animation of the idea to support the presentation. The judges for the same were Mr. Saurabh Trivedi, Co-founder & Director, Boudhik Ventures; Mr. Devesh Rakhecha, Founder & Director, Marwari Catalysts and Mr. Kailash Gandhi, Director, KRG Strategy Consultancy. The teams were evaluated on the basis of the value proposition, fund usage, impact on society, scalability and needs addressed by their budding start-ups.
The second day kicked off with a keynote session by Mr. S.R. Nair, Co-founder & Director, Stallion Group. He spoke about how India is the biggest soft power worldwide. From production and testing to implementation and delivery, in the IT sector, around 60% of it is managed by Indian. He also emphasised the value startups are adding to the economy as an employment generator. The event was carried forward by the speeches of the esteemed guests for the noon, Dr. Dhirendra Kumar, General Manager, NABARD and Mr. Hari Prasad, Founder & CEO, Live Long Wealth. Dr. Dhirendra talked about some of the domains and issues NABARD is working on, namely Agriculture, Fintech, Climate change, etc. Mr. Prasad spoke about the major misconception that the general public has about the stock market. He said that this is deep-rooted in us due to the lack of financial knowledge due to the curriculum and how Live Long Wealth is working to solve this issue and make people more financially aware.
Later, the results of the Startup Hunt were announced. SAMATVA.ai from Sir M. Visvesvaraya Institute of Technology, Bangalore, InfinityX Innovations from Cambridge Institute of Technology & Rise and Shine from Goa Institute of Management emerged as the winner, first runner-up and second runner-up winning a total of 50,000, 30.000, and 20,000 INR as prize money, respectively, along with a chance to attend ISET program worth Rs. 2000 sponsored by “Learning While Travelling”.
Dileep Rudrakshula Kumar, Stuti Jain and Shashwat Jain emerged as the top 3 winners for Samprada – The Stock Trading Competiton.
The second edition of YES was concluded by a vote of thanks by Dr. Vinita Sahay, Director, IIM Bodh Gaya and Dr. Amresh Kumar, Chairperson, ECell. YES 2021 was definitely successful in instilling an entrepreneurial spirit and encouraging the individuals to work with full grit.