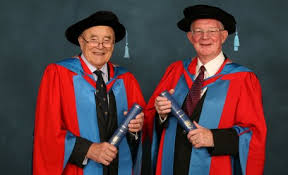 New Delhi: An innovative hip stem developed in Exeter 50 years ago today has now been implanted in more than two million patients across the globe.

The Exeter hip stem was developed in a collaboration between NHS surgeon Professor Robin Ling and University of Exeter engineer Dr Clive Lee, and is globally manufactured by Stryker. Their ground-breaking design overcame a problem of previous hip implants – that they eventually became slightly loose, requiring further surgery.

Previous prosthetic hips had been designed with the idea that the implant should remain rigidly fixed to the acrylic bone cement in which it is implanted.

Ling and Lee’s design was revolutionary. Unlike previous prosthetic hip stems, the Exeter design did not have a collar between the neck and the stem of the implant. This allowed the stem to subside slightly into the acrylic, self-tightening as it did so. This made best use of the material properties of the polymer when bearing weight as the person moved on their new hip. This helped to significantly reduce the number of follow-up revision surgeries needed 1.

Since the first implant on November 27 1970, the Exeter hip stem has been implanted globally in over two million patients, with one million happening in the last 10 years alone. In 2018, Universities UK listed the Exeter Hip among the 100 best breakthroughs from university innovation. Its success continues to grow, with research demonstrating its longevity.

A 2016 study, found the hip was still functioning well in 99 per cent of patients at 23 years follow-up2, and in another study in 2020, patients implanted with an Exeter stem 50 years or younger, demonstrated that the hip performed well over time in 96 per cent of people 3. Further research has found that the Exeter Hip Unit’s use of the Exeter hip stem for implants generates far superior results, when compared to the UK national average 4.

Dr Clive Lee, who worked at the University of Exeter when he co-created the Exeter hip, spoke of his pride at its longevity and success. “I started out not really knowing what a total hip replacement should look like – that was probably a huge advantage. I designed a very simple structure, and it turned out that going back to basic principles worked out very well indeed.

“We were aiming for a hip replacement that would last perhaps eight or nine years, and that would benefit patients locally. It’s a huge testament to the Exeter team and the university and NHS working together that it’s had such fantastic success. It’s a source of great pride.”

Professor John Timperley, Consultant Orthopaedic surgeon of the Princess Elizabeth Orthopaedic Centre and Nuffield Health Hospital, Exeter, said: “The Exeter stem is implanted in countries all over the world and since all National joint registries confirm excellent results, use of the Exeter hip continues to grow on all continents. This hip system has stood the test of time and continues to deliver a impressive clinical outcome fifty years later because the surgical team, in collaboration with Stryker continue to evolve and refine techniques.”

In 2016, the first Exeter hip implant was performed with Mako SmartRoboticsTM in Brisbane, Australia. Today, Exeter remains the only cemented stem available for robotic total hip arthroplasty, with Professor Timperley describing it a “perfect fit” for the robotic system.

Professor Janice Kay, Provsot of the University of Exeter, said: “The Exeter Hip is one of the great success stories of the expertise of university researchers and healthcare experts combining for the meaningful benefit of patients. It’s a collaboration at the heart of our ongoing world-leading research on a range of orthopaedic and musculoskeletal treatments. We’re so proud of the global legacy Exeter hip. As research continues to emerge to demonstrate its endurance, I trust the Exeter hip will still be celebrated as the best on the market for years to come.”

Jonathan Howell, Consultant Orthopaedic Surgeon at the Royal Devon and Exeter NHS Foundation Trust said: “The worldwide success of the Exeter hip replacement is really quite extraordinary. It started 50 years ago, in 1970, and for the first five years its use was essentially restricted to Exeter because its inventors, Professor Robin Ling and Dr Clive Lee, wanted to study its results closely. The results proved to be outstanding – word spread, and the reliability of the Exeter hip lead to its use extending across the globe. The Exeter hip has relieved the pain of those afflicted with hip arthritis, both old and young, allowing them to resume the activities that they enjoy. We have patients returning to hiking, swimming, tennis, golf, and even activities that people may not associate with hip replacements, such as skiing. It is such a privilege for us at the Princess Elizabeth Orthopaedic Centre to be custodians of this legacy and so rewarding for us to be able to improve the quality of life for so many people.”

“It’s incredibly rare to see an implant, or really any medical device, that has stood the test of time like Exeter.” said Kathy Truppi, Vice President of Marketing for Stryker’s Joint Replacement division. “We have always believed that the best orthopaedic products are developed by working closely with surgeons. Exeter’s 50 years of success are a testament to that philosophy and I look forward to seeing how Exeter and Mako continue to advance the field of joint replacement and transform patient lives for the next 50 years.”