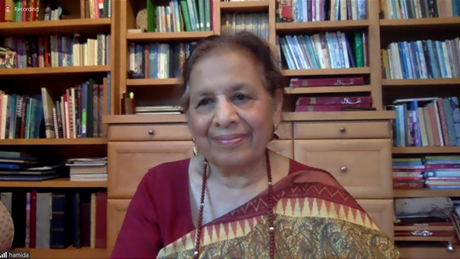 ‘The first name of Urdu language was Hindvi, meaning born in India’- Prof Hamida Banu Chopra elucidated the origin and evolution of Urdu during IKS lectures at IIT Gandhinagar

Gandhinagar: As a part of the sixth edition of the Introduction to Indian Knowledge Systems elective course (IKS 2022), the Indian Institute of Technology Gandhinagar (IITGN) hosted three fascinating lectures by Prof Hamida Banu Chopra, an eminent expert of Urdu language and literature, on April 7, 8, and 12, 2022. The three captivating lectures, which were filled with the poetic beauty of the Urdu language, were titled as: 1) ‘The Origin and Evolution of Urdu Language’, 2) ‘Ghazal, Nazm and Rubai: The Beautiful Development of Urdu Literature’, and 3) a recitation of ‘Chakbast’s Urdu Ramayana’.

In her first lecture, Prof Hamida Banu Chopra explained the idea that language is an instrument to express one’s thoughts, emotions, and culture. It takes centuries for any language to develop and reach its zenith. Tracing the origin, history, and evolution of the Urdu language, Prof Chopra said, “The 15th century Mughal Empire had Turkish, Baluchistani, Samarkandi, and Hindustani soldiers in its army situated at and near Delhi. Their communication gave rise to a language, which was also influenced by other languages spoken in the areas close to Delhi. With time, this language was called Hindvi, and it also became popular among Sufi saints and the masses. Hindvi is the first name of the Urdu language, meaning born in India. The time of Bahadur Shah Zafar is called the golden era of the Urdu language.” She also emphasised that pronunciation in any language is a crucial factor that demands our attention. The sweetness and beauty of the Urdu language come from its correct pronunciation. Wrong pronunciation can often drastically change the meaning of a word or phrase.

Her second talk highlighted the development of poetry in Urdu literature, providing an overview of different genres: ghazal, nazm, and rubai. She explained that emotions expressed in an ordered manner through words in a musical format constitute Shayari (Urdu poetry). She also underlined the significant contributions of some Urdu poets and writers to society in the form of critical life lessons given in through their poetry. She read out and explained several excerpts from Urdu poetry and also discussed her thoughts on the strong relationship between Hindi and Uru. “Hindi and Urdu are different languages, but each utilises several words from another. Moreover, their grammar is the same, making them two sisters”, she said.

In the third lecture, Prof Chopra introduced the Urdu poet Brij Narayan Chakbast (1882-1926). She recited and explained some parts of his nazm – “Ramayan ka Ek Scene.” All the talks concluded with lively Q & A sessions with students and participants.

Prof Hamida Banu Chopra has been teaching the Urdu language and literature for over 30 years. She has been a lecturer at the University of California at Berkeley and taught at places around the San Francisco Bay Area, including the India Community Center in Milpitas. Prof Chopra has also been a visiting faculty at IITGN. She has held Urdu poetry recitals in the United States and India, where audiences enjoyed selected Urdu poems and learned about the life and works of the great poets. She strongly feels that the beautiful Urdu language, its writings, and culture should be preserved and promoted worldwide.

This edition of IKS 2022 is being held in hybrid mode on the theme ‘Precolonial India’s Treasure House of Literatures’. The course is open to students and anyone interested in India’s knowledge systems and cultural heritage. They can join the course for free by registering online at: http://iks.iitgn.ac.in/. All lectures will be live-streamed on IITGN’s YouTube channel. The course’s website will carry regular announcements and updates on the speakers and lectures.

Central University of Punjab organized a webinar on Dr. B.R. Ambedkar: The Vision for India