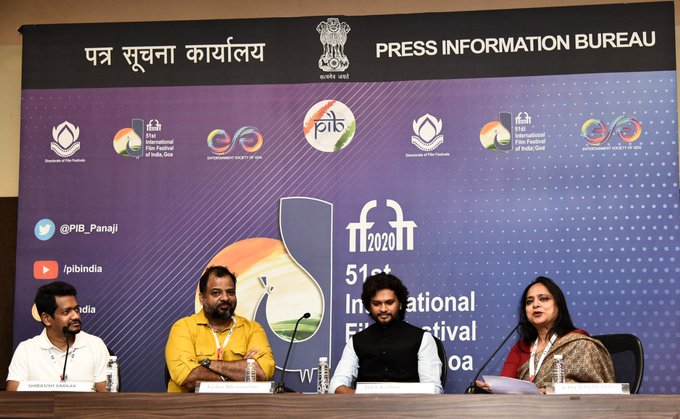 New Delhi: The flagship Indian Panorama section of the 51st International film festival of India was inaugurated in the presence of the Jury members and directors of both the non-feature and feature films, today in Goa.

The Jury, along with the cast and crew of both the feature and non-feature films were felicitated for their participation in the Festival.

The Director of the opening non-feature film “Paanchika”, Ankit Kothari, introduced his film as a story of friendship. It is about two seven year old girls in the salt mountains of Little Rann of Kutch in Gujarat and how their friendship battles the phantoms of casteism.

President of India to grace the commemoration of the 100th…

Speaking during the occasion, the director of the opening feature film ‘Saand ki Aankh’, Tushar Hiranandani said, “The film is a story of a grand-mother duo Chandro and Prakashi Tomar from a village in Uttar Pradesh who join a local shooting range to encourage their daughters and end up winning 352 medals each as sharp shooters.” The debutant director also thanked the producers of the film for making it a success.

A total of 23 feature and 20 non feature films have been selected for the flagship Indian Panorama Section of the 51st of International Film Festival of India.

The selected films will be showcased on the big screen for all the registered delegates and representatives from the selected films, during the nine days film festival in Goa, from 16th-24th January 2021.

Indian Panorama which represents the finest films from across the country has proved to be an excellent platform for promoting regional and talented film makers.