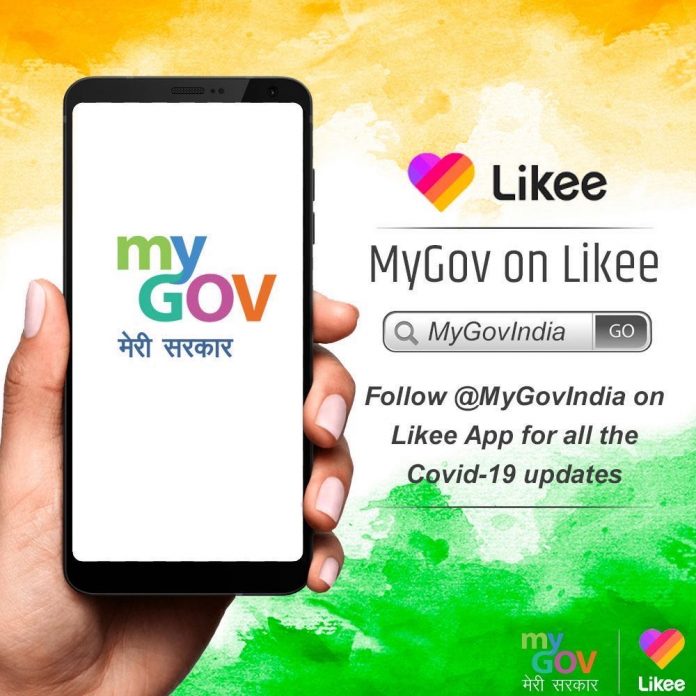 New Delhi: Indian government’s citizen engagement platform MyGovIndia has launched an official profile on Likee App, the pioneering short video platform by Singapore-based BIGO Technology Pte Ltd, to expand the ambit of the ongoing efforts to tackle the crisis triggered by Covid-19 aka Coronavirus pandemic. To ensure real-time dissemination of official information, a profile ‘MyGovIndia’ has been launched on the short video platform, which was recently adjudged the sixth most downloaded apps globally.

Recently, MyGovIndia went live on Likee to stream the 64th edition of Prime Minister Narendra Modi’s radio programme ‘Mann Ki Baat’. The live streaming clocked millions of views. The profile is also being used to encourage users to download Aarogya Setu mobile application, which has been developed by the Indian government to track Coronavirus patients. The users have also been provided with a download link on Likee to ease the downloading of Aarogya Setu app from both Google Play store and App store.

A hashtag, #AarogyaSetu has also been launched on Likee in a bid to ensure increased downloads of the app, which is designed to alert people if anyone in their vicinity tests positive for Covid-19. Likee influencers and other users have created multiple informative videos under the hashtag to spread the message among their fans and followers. The hashtag clocked more than 140 million views.

“It has been the endeavour of MyGov to act as a bridge between citizens and government and ensure citizen participation and information dissemination on popular platforms such as Likee. Towards this objective, the MyGov Likee page has greatly helped increase our outreach and engagement related to Covid19, especially with regional audiences,” said Shri Abhishek Singh, CEO, MyGovIndia.

Popular Bollywood actors Isha Koppikar & Aamir Ali, who are also known artists in the Indian television industry joined hands with Likee to promote #AarogyaSetu. Both the actors created exclusive Likee videos and encouraged their fans and followers to show their support towards this initiative by MyGovIndia.