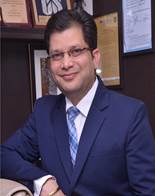 CS Devendra V. Deshpande, elected as President and CS Manish Gupta, elected as Vice President of the Institute of Company Secretaries of India for the year 2022 w.e.f. 19th January 2022.

With over 15 years of experience as a Practicing Company Secretary, he specialises in the field of Corporate Laws, Foreign Exchange Laws, Audit under Company Law and other Allied Laws, Secretarial Audit and Corporate Restructuring.

He has been actively associated with the Institute since 2004 and was elected to the WIRC of the ICSI, for the term 2015 – 18, he served as Chairman of Pune Chapter of WIRC of ICSI in the year 2013 and was an active Managing Committee member for the period from 2007 – 2014.

A fellow member of the ICSI, CS Manish Gupta is a Law Graduate and has a Master’s Degree in Commerce. He has been associated with the profession of Company Secretaries for last 18 years, as a Practicing Company Secretary.

He specialises in handling complex assignments on Corporate Law, Securities Law and Taxation Law. He is a regular speaker at training programmes held for students and members of the ICSI.

He was elected to the Northern India Regional Council of Institute of Company Secretaries of India for two consecutive terms in 2011-2014 and 2015-2018 and was unanimously elected as the Chairman of NIRC of ICSI for the year 2016.