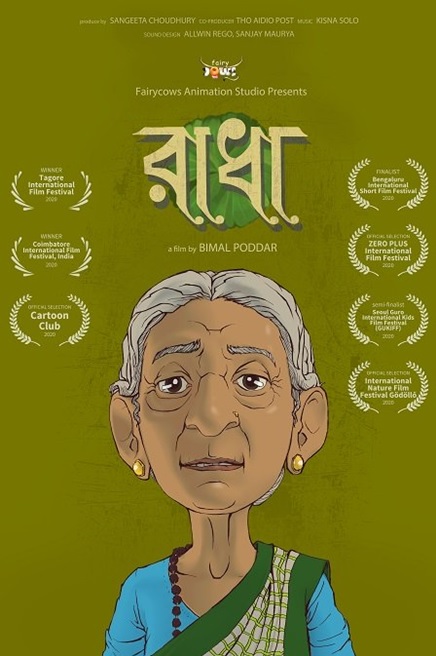 “The idea of letting go of a person you love, for his or her benefit, has always made me wonder”: Radha Director Bimal Poddar

Panaji: “The idea of letting go of a person you love, for his or her benefit, has always made me wonder.” That is how the story developed, says Director Bimal Poddar, explaining the origin of his Bengali animated cartoon film Radha, an ode to the ones who wait for us back at home, and will continue to do so with love. He was addressing a press conference in Panaji, Goa today, January 22, 2021, during the 51st International Film Festival of India. The film has been screened in the Indian Panorama Non Feature section of the festival. Radha: The Eternal Melody is his first film as an independent filmmaker.

Set in Kolkata, Radha weaves an invisible bond between two people, similar to that of Radha’s wait for Krishna after he left her in Vrindavan. It is an emotional journey of love and sacrifice; it tells the story of the elderly eponymous character and a young boy whom she nurtured very dearly, who grow apart with passage of time. She loves him with all her heart and the young boy too looks up to her for everything. Radha was his mentor, friend and idol. She was his inspiration to strive for his dreams and face the challenges in life. He, on the other hand, brings a smile to her face and makes her laugh. But having gotten separated over time, staying in two different cities, she now waits to catch a glimpse of him.

Speaking about the two central characters, Poddar said: “It’s always easy to identify characters from your own personal life, with whom you can associate Radha and the young boy.” Radha represents an old, lonely lady from every household in present times where children leave their roots for a better prospect, career, and lifestyle. There may not be anything wrong in it, but the older ones of the families are left alone and they have nothing else but memories of bygone days to fall back on.

Poddar, who is also the producer, editor and Director of Photography of the animation movie, said that he did not want the audience to be confined only to children. “Though it is an animated cartoon film, we wanted to reach the adult audience through our film. From the beginning of the project, we knew we wanted to target a broader audience, rather than kids’ category which mainstream animated films usually target.”

Sony YAY! brings leading musicians of the country together…

Poddar spoke about the particular challenge involved in creating the characters in the animation film format. “Making animation films is time-consuming. The scenes in Radha have been carefully conceived, with focus on minute detailing. It took precious time to achieve it”.

Speaking about animation film industry in India, the Director said: “We are still missing meaningful content in the industry. Even though the feature film industry in India has evolved considerably, animation industry is still taking off. Animation format of movie making is taking wings in certain pockets of the country and will take some more time to go full throttle, like in the West.”

He spoke of the need for more resources, to make this possible. “Making an animation feature film is time-consuming and needs more funding. Flawless animation movie making happens in the West; but we do not have necessary resources”.

Thanking IFFI for selecting his film, Poddar said: “It is a wonderful feeling to be here at IFFI. It’s always good to know that your work is appreciated and enjoyed by the viewers. Hats off to the entire IFFI team for pulling off such a big event during the crisis situation.”

“India has made several mythological animation stories, it’s time one considers current issues and themes as well”, he commented, in a response to a media query.

University of Bristol: Future of mathematics on global stage looks brighter thanks to £20 million funding boost

Sony YAY! brings leading musicians of the country together to wield the power of…