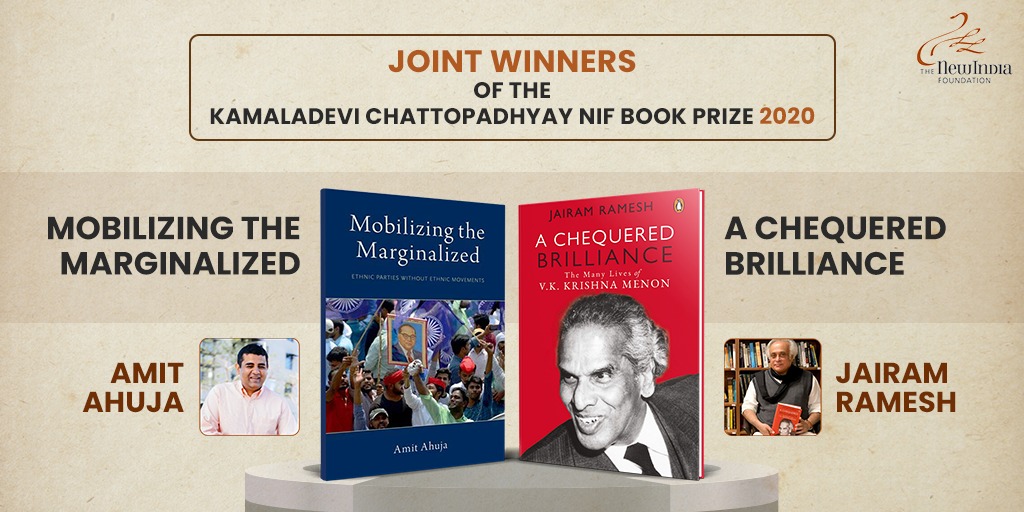 Bangalore: The jury of the Kamaladevi Chattopadhyay NIF Book Prize 2020 has for this year announced two winners – Amit Ahuja, for Mobilizing the Marginalized: Ethnic Parties without Ethnic Movements, and Jairam Ramesh for A Chequered Brilliance: The Many Lives of V.K. Krishna Menon.

The two winners were selected from a diverse shortlist of six books covering a century of modern Indian history and encompassing several genres. The Kamaladevi Chattopadhyay Book Prize recognises and celebrates excellence in non-fiction writings on modern/ contemporary India by writers from all nationalities.

The 2020 winners will share the prize money of 15 lacs for their respective books and will each receive the Book Prize trophy.

The Jury citation for the two winners for the Kamaladevi Chattopadhyay NIF Book Prize 2020 reads:

”Mobilizing the Marginalized: Ethnic Parties without Ethnic Movements (Oxford University Press) by Amit Ahuja is an outstanding first book by a young scholar. Through extensive field research in four states, Ahuja unravels an intriguing puzzle: why is it that Dalit ethnic parties perform poorly in states where their social mobilization has historically been strong, yet perform well in states where such mobilization has historically been weak? He also shows how the social mobilization of Dalits, dividing their support across parties, results in superior welfare outcomes than when they vote as a bloc for one ethnic party. This is an elegantly written and accessible work of scholarship that richly illuminates the relationship between social movements and political parties in redeeming the promise of Indian democracy for marginalized groups.”

“A Chequered Brilliance: The Many Lives of V.K. Krishna Menon (Penguin Random House) by Jairam Ramesh is an engaging biography of an important supporting player in Indian politics, whose career spanned decades of political work, first in Britain and later in India. The book provides fascinating insights into the personal and public life of Krishna Menon: his friendships and animosities, his foibles and strengths, and the multiple facets of his life as editor, publisher, lawyer, councillor, propagandist, diplomat, and cabinet minister. Ramesh chronicles Menon’s relentless campaign for India’s freedom in Britain and the ups and downs of his close relationship with Jawaharlal Nehru. The opprobrium surrounding his role in the disastrous (from an Indian point of view) conflict with China in 1962 have tended to obscure from public memory his diplomatic achievements, especially his celebrated performance at the United Nations in the 1950s, and this book places on record the evidence on all these issues without partisan judgment. Ramesh has delved deep into new archival materials to produce a compelling portrait of a brilliant, complicated, and controversial man, whose public life came to a rather tragic end.”