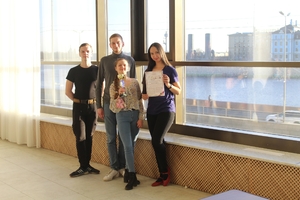 “Karelian Souvenir” became the 1st degree laureate of the full-time round of the All-Russian Olympiad of Arts of the North-West Federal District.
Let us remind you that this event is held in three stages in an intramural and extramural format.

Stage I of the project – an extramural qualifying round – was held from September 30, 2020 to January 10, 2021. At this stage, the folk dance collective “Karelian Souvenir” chose two dances: the Karelian dance “Guys from another village” in the nomination “Folk dance” and the Finnish dance “Povorotiki” in the nomination “Stylized folk dance” – both numbers received a 1st degree laureate diploma and invitation to the next round.

Stage II – face-to-face tour – is held in the capitals of federal districts. The qualifying round for the Northwestern Federal District took place in St. Petersburg. At this stage, the members of the group decided to present only one number – the Karelian dance “Guys from another village”, which was duly appreciated by the expert council. The result of the performance was a 1st degree laureate diploma and an invitation to the final.

Stage III – the final of the project will take place in Kazan from 28 to 31 October 2021. The strongest artists from all over the country, who have become the best in their regions, are invited to it.