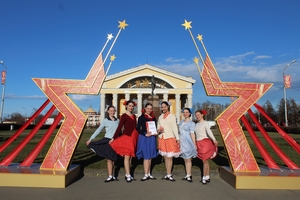 By India Education Diary Bureau Admin On May 12, 2021
Share

Members of the PetrSU folk dance group “Karelian Souvenir” made their creative contribution to the celebration of Victory Day.
On May 8, festive events organized by the City House of Culture took place in the Solomennoye microdistrict. The rain and cold wind made some adjustments to the concert program, but the guys cheered everyone up with an incendiary dance to everyone’s favorite Katyusha song, and Yegor Proskuryakov, a student at the Institute of Biology, Ecology and Agricultural Technologies, performed the Yablochko sailor dance.

On May 9, on Kirov Square, a gala concert of the winners of the City Patriotic Festival “Salute to Victory”, organized by the Youth Center “Smena”, was held. The 10 best performances of vocal, choreographic and declamatory creativity on a patriotic theme were selected for the final of the festival. The concert was opened by the dance “Katyusha” performed by the folk dance group “Karelian Souvenir”, and at the end of the concert all the finalists were congratulated on their victory and presented with diplomas to the winners and commemorative signs of the Laureates, Deputy of the Petrozavodsk City Council and Deputy Director of the Youth Center “Smena” Maxim Vadimovich Truvalev.