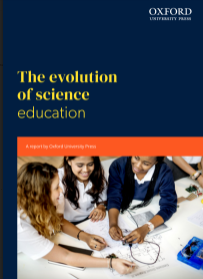 The majority of teachers and educators do not believe science education is fit for the future: OUP Global Survey –

• Science teachers in India are more optimistic vs. global average that the current curriculum for science is meeting the needs of pupils. • Nearly 2/3rd of India respondents believe that the pandemic has changed the focus of science education India, with focus moving towards Covid-19 and biological sciences in particular. • 80 per cent of India respondents agree that the science curriculum taught in schools enables students to become scientifically literate and active citizens vs. 59 per cent in the United Kingdom and 67 per cent in Hong Kong

New Delhi:  Fewer than half of the respondents (46 per cent) who took part in The Evolution of Science Education survey by Oxford University Press believe that the science curriculum in their country prepares children for the challenges our world will face in the future.

Only 31 per cent of teachers surveyed believe that science education in their country is fit for the future, according to a report published by Oxford University Press, the world’s largest university press.

The Evolution of Science Education includes insights from 398 teachers in *22 countries and regions—with most respondents from the United Kingdom (44%) and India (19%). While there are local nuances, there are also notable consistencies in key areas such as the science curriculum’s relevance in the future and how well it prepares pupils to navigate and address challenges the world will face, such as climate change and the evolving role of technology.

Sivaramakrishnan Venkateswaran, Managing Director – Oxford University Press India said, “The study of science helps to fuel curiosity in young minds and makes them think about solutions to challenges in everyday life. Its relevance in a pandemic-afflicted world has only grown. It was important to sense check what science teachers felt about how their subject needed to evolve. We are delighted with the strong participation of science teachers from India in our survey and their belief that the current curriculum is helping students to become scientifically literate and active citizens.”

The research was undertaken alongside OUP’s active involvement in developing the science framework for the Programme for International Assessment (PISA) 2025. Teachers were asked to recommend ways in which science curricula might evolve in order to remain relevant to today’s world, and that of tomorrow. Their recommendations included:

COVID-19 has undoubtedly had an impact on science teaching in the last year, particularly restricting practical experimentation in the classroom, but the paper highlights numerous other issues that have been brought to light by the pandemic and need to be resolved.

Teachers surveyed believe the core purpose of science education should be inspiring learners to engage with science, teaching underpinning scientific concepts, teaching skills to enable effective experimentation, and helping learners to achieve a range of desirable outcomes through science. To ensure science education evolves and remains relevant in the future, teachers believe there should be more focus on climate change as well as tackling fake news and adapting faster to technological and societal change.

Andreas Schleicher, Director for Education and Skills, and Special Advisor on Education Policy to the Secretary-General at the Organisation for Economic Co-operation and Development (OECD) said,“I always enjoy hearing teacher’s views on the future of education and welcome this report. The scientific challenges of the past year with the pandemic and the ever-growing signs of climate change mean that there has never been a more important time to focus on science, empowering students to thrive in a changing world. I look forward to continuing this conversation about the future of science education, particularly when we release the new PISA 2025 science framework next year.”

You can view the report here.

From the questions asked, on average science teachers in India are more optimistic that the current curriculum for science is meeting the needs of pupils now, and in the future. 15 per cent of respondents strongly agree that the curriculum adequately prepares students for challenges they will face in the world, opposed to six per cent in Hong Kong and five percent in the United Kingdom. Furthermore, 80 per cent of respondents agree that the science curriculum taught in schools enables students to become scientifically literate and active citizens, opposed to 59 per cent in the United Kingdom and 67 per cent in Hong Kong. Of the 398 teachers that responded in the report, 74 were from India.

Only two per cent of respondents strongly agree that the science curriculum taught in schools enables students to become scientifically literate and active citizens, significantly less than the UK (10 per cent) and India (18 per cent). Respondents from Hong Kong were more optimistic than those in the UK and India that the current science curriculum prepares young people to address the challenges that our world will face in the future, with only 16 per cent disagreeing, opposed to 26 percent in India and 33 per cent in the United Kingdom. Nobody in Hong Kong strongly disagreed that the curriculum helps pupils address challenges that our world will face in the future. Of the 398 teachers that responded in the report, 31 were from Hong Kong.