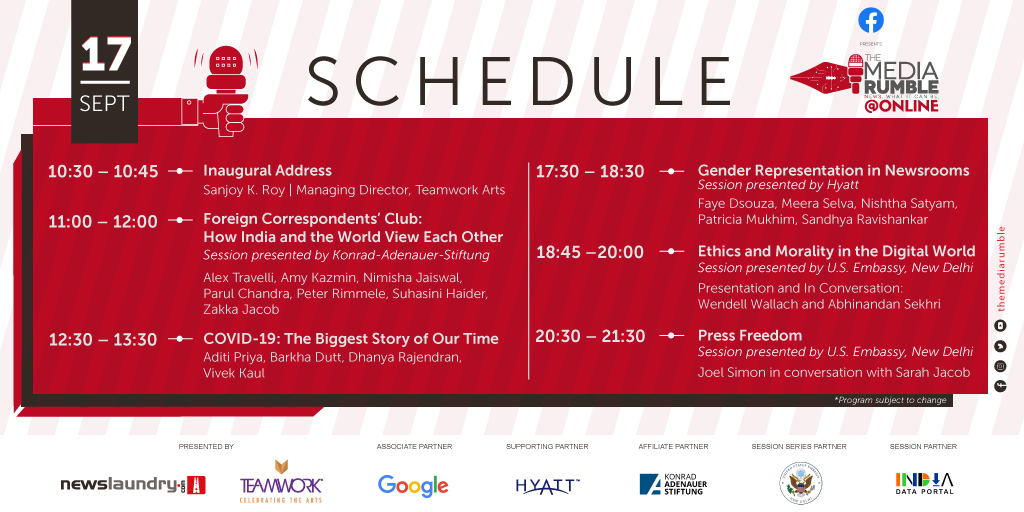 New Delhi: The Media Rumble (TMR), the annual news and media forum, hosted by Newslaundry and Teamwork Arts, will be back this week in a digital avatar titled TMR@Online. At TMR, leading news professionals, tech innovators, policymakers, filmmakers, and investors from across the world discuss the future of news, tech, and policy. Scheduled from 17-20 September 2020, TMR@Online brings South Asia’s largest media forum to audiences at home on their personal screens. The forum can be accessed through The Media Rumble Website via free online registration.

The COVID-19 pandemic has become the biggest story of our times and the sessions at TMR@Online reflect that, exploring various aspects of the pandemic story – health, economics, and socio-political. Has COVID-19 changed the way countries, particularly India, look at healthcare from a policy and ‘newsworthiness’ perspective? How has India’s public and private healthcare sectors responded to the pandemic?

The pandemic has also provided fertile ground for those who gain currency by spreading mis/disinformation. A session on this will explore the various shades of such corrupted information – from the statistics related to infection and death rates, to home-made cures. The discussion will also focus on how such mis/disinformation can be best tackled – is technological intervention the need of the hour, and if so, what are the tech hacks that can be deployed at the earliest and the role of social media companies in tackling the spread of such information.

According to some estimates, 10% of all deaths in the Rwandan genocide were caused by hateful broadcasts, with Radio Rwanda playing a vital role. The session – Radio Rwanda: Hate News that led to genocide will discuss the impact of hate news on a country’s social fabric; the role of journalists and government officials in manufacturing this hate; why hate news sells more than nuanced perspective; and the reasons behind the rise of multiple ‘Radio Rwandas’ across the world today. Taking cue from the role ‘Hate Media’ has played in the past, another session Hate Media: When propaganda masquerades as the news and its impact on a nation’s social fabric will discuss the underlying reasons for this phenomenon, the mechanics behind how it works, the dangers it presents, and the most effective strategies to counter it.

Violent attacks on journalists, intimidation by law enforcement organisations, and outright censorship – press freedom across the world is in peril. Moderated by Sarah Jacob, a conversation with Joel Simon, Executive Director, Committee to Protect Journalists (CPJ) will explore the major sources of threat facing journalists today. It will discuss the role of media houses, government agencies, and law enforcement bodies in upholding the rights of journalists and providing adequate protection to ensure fair reportage.

Prof. Rasmus Nielsen, Director of the Reuters Institute for the Study of Journalism will make a presentation of the Digital News Report 2020, followed by a conversation on the impact of the pandemic across geographies, how business models and consumer behaviour are changing, and what the future holds for the news media. Also in discussion will be the subject of Ethics and Morality in the Digital World. Algorithms increasingly determine much of the human decision-making process – whether it is the news we consume or the food we order. This session will explore the ethical and moral codes that should govern the fourth industrial revolution, where artificial intelligence and machine learning will become all-pervasive as they merge with bio-tech and the internet of things. There will also be discussions on upskilling journalists for the digital world and the importance of data in journalism.

Karnal Singh, a 1984-batch IPS officer and author of BATLA HOUSE: An Encounter That Shook the Nation is set to be released in September. This session will discuss his book and will explore the administrative reforms needed to delink the police from political interference; the relationship of the police with the media, stressing particularly on how media trials influence investigations; and how Indian police forces are dealing with the speed of information that flows on social media.

There will also be conversations around entertainment media and a comic spin on the news media itself. Indian cinema is going through a churn – the storylines portrayed on screen are increasingly reflecting India’s realities, as opposed to showcasing an utopian fantasy. A session titled Slice of Life Cinema: Reflecting India’s realities will explore the reasons behind the success of such stories; the impact of OTT platforms on audience behaviour, and as a result, on film-writing and production.

Stand-up acts in these times have come of age and have created their own niche. Satire, sarcasm, and comedy have brought a new generation of storytellers in this digital age. Mostly unforgiving, often reflective of the unreal realities, comics present a light-hearted counter to the mainstream. Live stand-up acts by Aditi Mittal and Abijit Ganguly, specially curated for TMR@Online, will take mainstream news to the cleaners in a show called State of the Media. Scheduled for 18th September, tickets for the stand-up show are available on BookMyShow. https://in.bookmyshow.com/national-capital-region-ncr/events/state-of-the-media/ET00137808

Speaking about The Media Rumble 2020, Sanjoy K. Roy, Managing Director, Teamwork Arts, said, “In a highly polarised world, the need for a platform with divergent views and ideas is the need of our times. The changing DNA of newsrooms and its irreversible impact on society throw many challenging questions. The range of topics and issues discussed at TMR@Online will certainly be a milestone in the coming days.”

Abhinandan Sekhri, Co-founder, Newslaundry said, “The ecosystem that creates and depends on news media has many brilliant minds entertaining and pursing ideas to declutter an information overload in a digital age. Concepts, conversations and innovations in distribution, creation, policy, business and technology to ensure that news remains accessible, honest and relevant are the hallmark of The Media Rumble. We hope we make it worth your while this year too.”

Ken42 to revolutionise coaching institutes; targets 5% of the market share