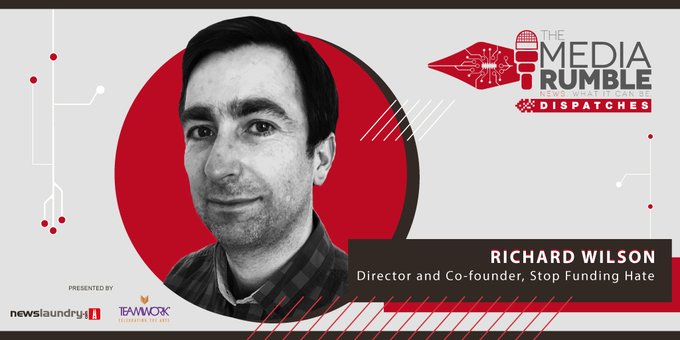 The Media Rumble Dispatches to Focus on Hate News

• Hate News, Brought to you by: With Great Advertising Comes Great Responsibility

• The session is scheduled for Friday 4th September at 5pm

New Delhi: The Media Rumble (TMR), the annual news and media forum, hosted by Newslaundry and Teamwork Arts, comes with its fifth session of TMR Dispatches on a topic that is affecting the world – ‘Hate News, Brought to you by: With Great Advertising Comes Great Responsibility’. Scheduled for 4th September 2020, TMR Dispatches is an online series featuring that spans the North, East, West, and South India as well as discussing the media issues internationally. It brings together leading news professionals from India and Abroad to discuss larger news media trends.

Nandini Jammi, Co-founder, Sleeping Giants Movement and Check My Ads USA and Richard Wilson, Co-Founder, Stop Funding Hate, UK, will address the issue of brand and corporate sponsored-advertising in the TMR dispatches fifth session. The session will moderated by Manisha Pande the Executive Editor at Newslaundry on Friday, 4th September at 5pm.

Thales and IIIT-Delhi sign a Memorandum of Understanding on…

Adamas Earns Platinum in Academic Teaching and Learning in…

Nandini Jammi has been immersed in the world of brand safety & digital advertising since 2016, when she began running Sleeping Giants, the social media campaign that alerted advertisers that their ads were funding hate speech on Breitbart News. Her efforts led to her being recognized by Business Insider as one of the industry leaders “fixing” digital advertising. In 2019, Sleeping Giants won a Gold Cannes Lion Award for Best Social Media Campaign and a People’s Voice for Public Service and Activism Webby Award. At Check My Ads, Nandini turns her social media experience into proactive strategies for brands.

Richard Wilson is a writer, human rights activist and Co-founder of Stop Funding Hate. Launched in August 2016, the campaign seeks to make hate unprofitable, and promote the idea of ‘ethical advertising’ by persuading companies to pull advertising from media that incite hatred against minority groups. Since the campaign began, there has been a substantial reduction in the number of anti-migrant front pages in the UK press. Stop Funding Hate is now working to bring about longer-term change by promoting “ethical advertising” as a mainstream business ethics issue, and through sharing knowledge of the #StopFundingHate campaigning model, both in the UK and internationally.

TMR Dispatches in the last four series discussed and debated the issues challenging the North, East, West, and South India media. The first session of TMR Dispatches focused on North India under the theme: Myth or Reality? Hindi and proximity to Delhi give North India an advantage in the news space. The session acknowledged North India’s undisputed penetration into the news media, and discussed several other subjects such as the Hindi media’s role and the still-prevalent upper-caste dominance in newsrooms. The second session was on East India and was titled – ‘We don’t need no mainstream: Our stories, our storytellers’. The moot point discussed during the session was that the mainstream media’s ignorance of East India, particularly the Northeast, and the lack of importance that the region garnered in prime time news. The panel also analysed whether the emergence of online news platforms had given a fresh lease of life to ground reportage and storytelling. The third session travelled to Western India under the theme – Mumbai’s Lutyens: Is entertainment journalism all about access? The session talked about the significance of having star access as a film journalist/critic, the limitations of this access, and how bigger stories remain untapped. The panel also discusses why the #MeToo movement fizzled out in Bollywood, and the vulnerability of comedians and their lack of faith in the mainstream media. The fourth session covered South India under the session– ‘Reclaiming centre space in the news – A robust market and innovation hub’. The session discusses how regional media houses from Kerala, Tamil Nadu, Karnataka, Telangana and Andhra Pradesh have carved out an effective space for themselves. What drives regional journalism in these states, and what do panellists think about the exclusionary news culture of Delhi newsrooms?

The fourth edition of TMR, titled TMR@Online, will be a digital-only forum. Scheduled between 17-20 September 2020, TMR@Online will feature conversations and discussions on some of the most pressing issues concerning news media. Among the themes that TMR focuses on this year will naturally be the overwhelming impact of COVID-19, acknowledging the role of “media front-line warriors” while also analysing the economic impact of the pandemic on the news media – layoffs, ad-revenue trajectories and the need to rethink business models. Sessions on the migration crisis, and how it was covered by the press, will also be hosted. In addition, topics such as gender and caste composition of Indian media houses, press freedom, hate news, and the future of news media in an age of digital transformation will feature at TMR@Online.

Nature warriors who have planted millions of trees to make India greener, healthier