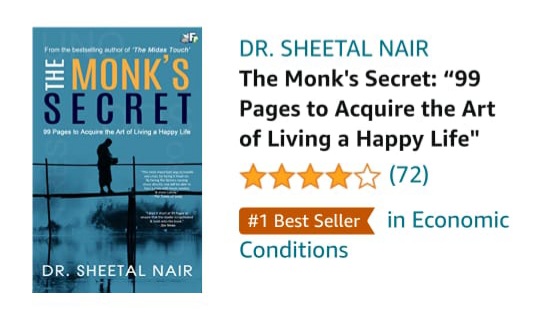 New Delhi: A serial entrepreneur and a promising storyteller, Dr. Sheetal Nair, achieves the best-seller status on Amazon for his new book titled with “The Monk’s Secret – 99 Pages to Acquire The Art of living a Happy Life” where he talks about the secret to leading a happy life.

After the success of his first book The Midas Touch – 99ages to Acquire The Art of Alchemy & Forge Champions, Dr Sheetal Nair’s latest book too has secured a place in the Amazon Best seller list.

Dr. Sheetal Nair can be rightly described as a man of creativity. With his enormous experience in the corporate sector, he desires to impact the lives of as many people as possible.

“The Monk’s Secret” – Dr. Sheetal Nair has delved deep into his interactions with inspiring mentors & Gurus, to end up with a four-pillar strategy which he calls the Uno, Dos, Tres & Cuattro. By merely following these strategies successfully one can move ahead on the path to success & happiness. What he has tried to mention in these 99 Pages are those skillsets which have helped him & others in acquiring success in life.

The four steps to do so, listed in the book are

(Uno)Try to understand how to make time your ally

(Tres)Believe in your own skillsets & abilities

(Cuattro)How to put yourself in the spotlight

There are certain formulas and procedures which, if followed faithfully, can make you a person whom other people like.

Reaching at Best Sellers list of Amazon, Dr. Sheetal Nair, Author said “A feeling of tremendous joy has engulfed me since I have achieved the primary objective which I set forth while writing this book – to reach the maximum number of people. People who have suffered the most mentally & physically due to the Covid-19 pandemic, because we as a race need to recuperate & look at the positives which are there around us, so that we can lead a happy & fulfilling life.”

This book essentially is a summation of Technique used by various Psychologists, Management Gurus, and Spiritual Gurus & Entrepreneurs to successfully manage one’s life in the best possible manner.

“The Monk’s Secret” is currently available on both Amazon & Flipkart as a paperback & e-book both.

iednewsdesk Jan 18, 2022
The impact of a trade deal between the UK and Australia on UK agriculture is examined in a new report from the…