This exhibition focuses on examining the traditional notions of Power, Patronage, and Piety through the lens of feminity. The three constructs have often been associated with masculinity in the well-worn grooves of religious and historic discourses. Celebrating International Women’s Day, this exhibition presents transcultural notions of Indian art and history representing ‘the female voice’. Spanning across different religious and social representations, it focuses on the iconic representations of women in India through sculptures, manuscripts, miniatures, jewellery, tapestries, ritual objects and amulets, as bearers of a unique visual and material culture. 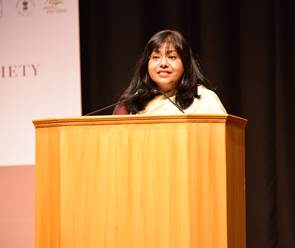 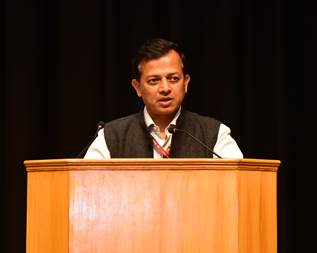 During her address Smt. Lily Pandeya congratulated team National Museum for curating such a special exhibition with the title ‘Power, Patronage, and Piety – Celebrating Womanhood’. The special exhibition dedicated to celebrating women depicts celebration of resilience and adaptability. When women access the museum, they are gaining access to ideas as well as getting opportunity to engage with arts enabling, encouraging environment. Let us fill all the colours of hope and joy to all the women of the world, she added.

Shri Partha Sarthi Sen Sharma stated that revolution does not take place  every day, what we do on a daily basis can yield a revolution. He also added that with our affirmative actions we  hope to  placed in a better  environment than  what we inherited. The feminine power is traced through the goddess cult and the female pantheon by examining texts and rituals, folk practices based on fertility rituals, and the manifestations of wisdom through divinities in Indic traditions. Patronage is explored via the literary texts and art commissioned by Queens and Princesses. The exhibition concludes with piety, both towards filial relations and religious discourses, through the feminine devotional practices. The objects collectively bring forth a historical narrative that has been part of an Indian consciousness for centuries. With almost a hundred objects on display, the exhibition highlights masterpieces from the collections of Pre-History, Archaeology, Manuscript, Anthropology, Decorative Art, Central Asian Antiquities, Pre-Columbian and Western Art, Painting, Numismatics, Epigraphy and Jewellery, and Arms and Armour. Beginning with the famous Dancing Girl and Mother Goddess from the Indus Valley Civilization and proceeding onward to the Classical and Medieval goddess cults in Hindu, Jain, and Buddhist traditions, the representation of Devi and Shakti is a common strand connecting such distinctive traditions. Royal power and patronage is represented by medieval art, commissioned by the female members of regal courts and families. Representations of women are also visible in pre-modern folk practices through pattachitras, warli painting, and matani pachedi among others. Aspects of power, patronage, and piety from ancient to modern times are highlighted in the exhibition, presenting the fundamental and prominent role women have played throughout India’s millennia.

The exhibition will remain open for public till 8th April, 2022.

Ministry of Culture and Ministry of Textiles to organise pan-India programme “Jharokha – Compendium of Indian handicraft/ handloom, art and culture”