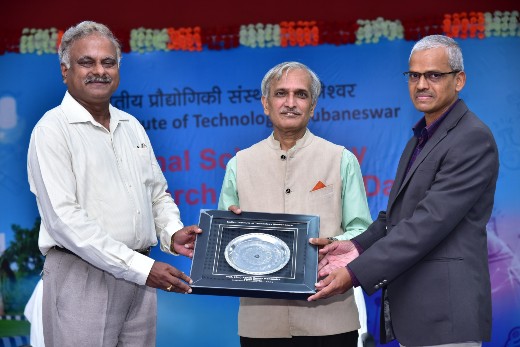 Bhubaneswar: Indian Institute of Technology Bhubaneswar observed the National Science Day on 28th February, 2021. Institute also celebrates this day as the Research Scholars’ Day of the institute. It is the 11th Research Scholars’ Day of the institute. National Science Day is observed to honour the invention of the Raman Effect by the Indian physicist and Nobel Laureate Sir C. V. Raman. On the eve of the Research Scholars’ Day the institute conducts a poster presentation competition among the research scholars and awards prizes to best posters. This year the competition was conducted on 27th February with the inauguration by Prof. R.V. Rajakumar, Director. The Chief Guest of the National Science Day event was Prof. Ashok Kumar Mahapatra, Former Director, AIIMS Bhubaneswar and Current Vice Chancellor, SOA University, Bhubaneswar. The event was presided over by the Director Prof. R.V. Raja Kumar.
Speaking on the Occasion, Prof. R.V. Rajakumar, Director, IIT Bhubaneswar, emphasized the contribution of science and technology in bettering human life and the need for further research. On this occasion, he complimented the ISRO Scientists for the commercial launch of satellites through PSLV C-51 paving the doors in to the new era of use of Indian space science for other nations. He said that the poster presentation by the research scholars of IIT Bhubaneswar provides a sample overview of the breadth of the research being conducted at the Institute. He made a proud mention about IIT Bhubaneswar being honoured with the “University of Year Award” at FICCI in its 13th year of its existence. He further emphasized that IIT Bhubaneswar has been working tirelessly towards realizing its dream which was made very ambitious recently to be of creating a national institute at par with the cream of global class.

Prof Kumar also spoke about the need for increasing the social relevance in our institutional research. He mentioned how the sudden onset of the pandemic posing us a lot of challenges and gaps in the global research in the area. Similarly, the recent Himachal disaster also made clear about the gaps existing in the disaster studies and mitigation methods. He thus stressed on the need for solving the problems faced by the country in the hinterland and thereby contributing to the progress of the nation.

Dept of Physics Celebrates “Centenary Year of Nobel Prize to…

The Chief Guest, Prof. Ashok Kumar Mahapatra, on the occasion stated about the several complex aspects of medical science and technology lucidly and in an easy to understand manner by giving day to day examples of daily life. He inspired the audience with the glorified message on how science has been able to alter the lives for a better future. He also spoke about the importance and role of students in the field of Science and Technology, empowering them towards progress and development of the nation, he stressed on the need for science and technology being of relevance to the society and humanity bringing about a transformational change in the lives of people. He emphasized on the need for translational research being an important component for the development of science and technology in the country along with need for holistic development.

Prof. R.K. Panda, Dean Alumni Affairs & International Relations, Dr. P R Sahu, Dean Academic Affairs and Col (Dr) Subodh Kumar, Registrar, IIT Bhubaneswar besides faculty, staff and students marked their presence at the event. The event also comprised of announcement of the award winning posters, as evaluated by a panel of experts followed by prizes and certificates being awarded to the Research Scholars of these award winning posters. The event ended with vote of thanks.