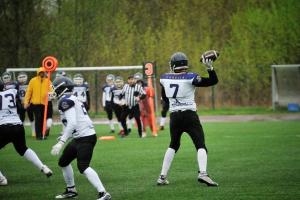 The new season of American football has started

The PetrSU American football team “Gunmen” has successfully opened a new sports season.  This year the team takes part in the Second League of the Russian Championship in the same division with teams from St. Petersburg, Moscow and Tula.

In the first game, the rival of the “Gunsmiths” was the “Tarantula” team from Tula. Despite the long journey of 1200 km, bad weather and the postponement of the game for an hour, the PetrSU team won with a score of 30: 8.

RWTH: “DECISION NAVI” from RWTH Aachen University can be…

The main heroes of the match as part of the “Gunmen” were: playing coach, teacher of the Department of Physical Culture Sergei Vladimirovich Kornev and students of the Medical Institute Nikita Golovanov and Nikita Galov, who were noted for their effective actions.

The next game of “The Gunsmiths” will take place on June 5 in St. Petersburg with the team of the Academy of the Ministry of Emergency Situations.

Results of the competition “Space through the eyes of children”

RWTH: “DECISION NAVI” from RWTH Aachen University can be used free of charge

University of Tübingen: Changes in brain activity in Rolandic epilepsy can be…

India Education Diary Bureau Admin Oct 28, 2021
Gandhinagar: As many as 11 PhD scholars of the Indian Institute of Technology Gandhinagar (IITGN) have been…

University of Freiburg: Expand and facilitate data access for…

RWTH: “DECISION NAVI” from RWTH Aachen University can be used free of…

University of Tübingen: Changes in brain activity in Rolandic epilepsy…