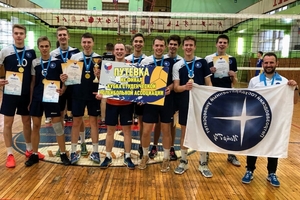 The national team of PetrSU under the leadership of coach Vladimir Dementyev won the qualifying round of the Student Volleyball Association Cup in the North-West Federal District and got a ticket to the final of the competition in Moscow.
The PetrSU national volleyball team led by coach Vladimir Dementyev became the winner of the qualifying round of the SVA-Northwestern Federal District (Student Volleyball Association) Cup, which was held in Vologda from 7 to 9 October.

New directions of tourism development will be discussed at…

Professor of PetrSU was elected to the Expert Council of the…

Teams from Arkhangelsk, Vologda, Pskov, Syktyvkar fought for the victory. According to the results of the starts, our athletes received a ticket to the finals of the competition in Moscow.

Scholarship of the Government of the Republic of Karelia