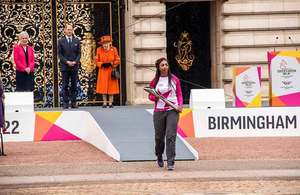 The relay will visit all 72 nations and territories of the Commonwealth for 294 days, covering 140,000 kilometres.

Her Majesty The Queen, accompanied by The Earl of Wessex, attended a special ceremony on the forecourt of Buckingham Palace to launch the 16th official Queen’s Baton Relay.

The ceremony saw Her Majesty place her message to the Commonwealth inside the Baton, which will be read aloud at the Birmingham 2022 Opening Ceremony next summer. The event also featured British Paralympic athlete Kadeena Cox as the first Batonbearer, a tri-service military band and a livestream performance from the City of Birmingham Symphony Orchestra.

The launch was the first major event for the Birmingham 2022 Commonwealth Games, which will be held from 28 July to 8 August. The relay will visit all 72 nations and territories of the Commonwealth for 294 days, covering 140,000 kilometres.

The Queen’s Baton Relay marks the countdown to the biggest and most exciting sporting event in Birmingham’s history. Not only will the Commonwealth Games put the West Midlands on the global stage, it will showcase the UK’s expertise in hosting inspirational and inclusive international events.

2022 is set to be an exciting year of celebration for our country with the Games, Her Majesty The Queen’s Platinum Jubilee and the Festival UK* 2022 all taking place. The baton represents the start of this, and will travel through 72 Commonwealth nations and territories. I look forward to the relay connecting communities around the world and encouraging people to get involved in the Games, including the next generation of sporting heroes.

UK: Nearly £2 million to be given to tech start-ups to power up the transport revolution