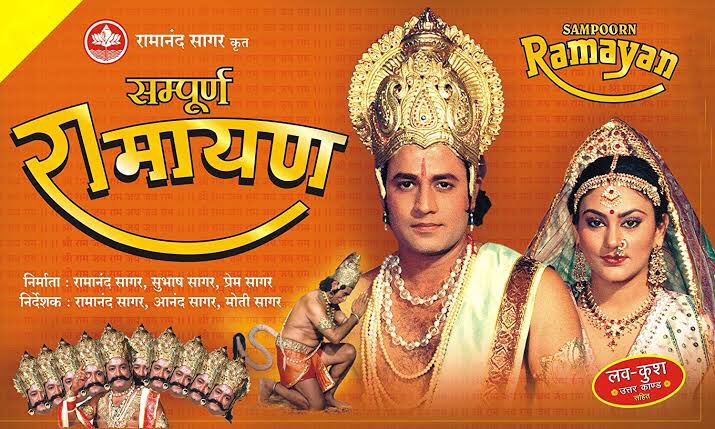 The mythological show Ramanand Sagar’s Ramayan was aired for the first time on January 25, 1987, Sunday morning on Doordarshan. Since there were less television at homes, People gathered at neighbour’s place to watch the epic Ramayan. The architecture Ramanand Sagar had made a total of 78 episodes, which was written by the various sages with a different language, but Shri Sagar had followed only Valmiki’s Ramayan and Tulasi Das’s Ramacharitamanas in the whole episode of Ramayan.
Already 33 years passed to the show, but today the same charm and the craze among the viewers to see the epic serial Ramayan again and again mostly, the younger generation who born the late 90s and early 20th century are demanded to Mistry of Information & Broadcasting and DD National to re-telecast the show via social media.
Due to this coronavirus pandemic situation, people were lockdown in their homes and for the high demand of the people of India. The return and re-telecast of Ramyan start on March 28 on DD National with daily two show from 9 to 10 in the morning and night. After that, Ramayan continued to be the most-watched show in India, week after week. The show was back on Doordarshan during the lockdown period to hooked the viewers to watch the show with family so that they could stay at home. DD National perceived a huge surge in its daily viewers during the third week of Ramayan’s re-telecast.
Finally, on April 16, Ramayan broke all the world record with most-watched show with 7.7 crore viewers, which was tweeted on the official page of Doordarshan National also gives thanks to all the viewers.
From the period 1987 to 1988, Ramayan has been viewed as the most-watched serial in the world for which it earns the Limca Books of Record as “the most-watched mythological serial in the world” till 2003. As a result, Ramayana appreciated a great viewership. According to BBC, Ramayan has been shown in 53 countries, more than 650 million viewers across the world have been viewed the show, making it the most-watched mythological show in the world.
On April 18, Ramayan concluded and was replaced with Uttar Ramayan, which features the story of Ram and Sita’s twins Luv and Kush their confrontation and reunion with their father Lord Ram. On May 2, the show ends after 36 days of the re-telecast in DD National.