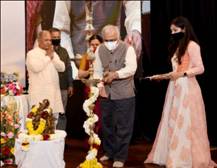 The ‘Sanklan’ of IISF-2020 is a document which reflects the efforts made and outcomes of this huge science festival: Dr. Shekhar C. Mande, DG-CSIR and Secretary DSIR

New Delhi: CSIR-National Institute of Science, Technology and Development Studies (NISTADS) organized a ceremony to bring out the outcome of IISF-2020 in the form of a scientific report “Sanklan”in New Delhi today.

On the occasion, a booklet “Sankalan” and “CSIR Compendium of Technologies-2021” were also released.

In his address, Dr. Shekhar C. Mande, DG-CSIR and Secretary DSIR, highlighted the importance of the IISF 2020. He said, “When we thought to organize IISF in pandemic time, we were not sure whether it would be fruitful. But when we moved ahead, we got the cooperation of Departments, Institutes, scientists and science lovers. And I would like to say that without the support of these people and dedicated organizers, we would not be able to succeed. He added that the ‘Sanklan’ of IISF-2020 is a document which reflects the efforts made and outcomes of this huge science festival”.

Delivering his address virtually, DST Secretary Prof. Ashutosh Sharma said that IISF has become a science movement and it is inspiring a whole lot of new generation along with other stakeholders. He added that every next edition of this science festival has been converted into an activity more vibrant and more fruitful to the society.

On this occasion, while welcoming the audiences and organizers, the Chief Coordinator and Director of the Nodal Institute (CSIR-NISTADS) Prof. Ranjana Aggarwal said, “We attempted our best to connect all the stakeholders and participants of IISF on virtual platform. We not only succeeded to connect with people across the world but also at the same time,we connected the people who live even in the far-flung areas of the country”. She also added that in the IISF 2020, there were 41 different events and each one was immensely concerned with society and humanity. Dr. Aggarwal expressed heart-felt gratitude to all the organizing agencies, scientists, students, and other stakeholders of IISF.

Department of Biotechnology (DBT), Govt. of India is one of the key organizers of the IISF since its inception. Dr. C.P. Goyal, Joint Secretary, DBT said on this occasion that Science plays very crucial role in human welfare. IISF not only encourages the students and science enthusiasts but it also serves the society and humanity at large.

Dr. Vijay P. Bhatkar, National President, VijnanaBharatidelivered the presidential address in this Sankalan Ceremony. He said that IISF is not only an annual event, but it has now become a science movement. “In 2015, it was started as a small beginning and the very first IISF was organized in IIT Delhi. When we organized first IISF, we did not even think that it will become an annual event. He emphasized that when we were planning to organize IISF 2020, the world as well as our country India were facing the challenges of COVID pandemic. But the organizers, stakeholders and participants made this program a grand success. This success became bigger because we did not give up even in pandemic situation. Conducting scientific sessions, panel discussions, Expo, poster presentations, live demonstrations on virtual platform and working day-night for realizing this even virtual festival into a reality was really a big challenge”, he said.

Shri Jayant Sahasrabudhe, National Organizing Secretary, VijananaBharati (VIBHA) said that IISF generates curiosity to pursue good science through the awareness of the great scientific discoveries and technological achievements which have been strength of ancient India.

IISF is an initiative of Govt. of India which is organized jointly by DST, DBT, MoES, CSIR and Health Ministry. VijnanaBharati (VIBHA) is the catalyst behind this science festival.

Festivals are the occasions where people assemble, interact and share their ideas and experiences. Science festivals have been organized around the world to make people aware about the happenings of science and how S&T impact our lives. To celebrate festival is embedded in the roots of Indian culture and traditions. So, the inspiration of India International Science Festival (IISF) is taken from the cultural heritage of our country.

IISF is a vibrant expression of science and technology of India which connects the world also. It is a unique program because it brings students, teachers, scientists, innovators, artisans, farmers, diplomats, policy makers and even S&T Ministers together to discuss the challenges and solutions. IISF is a platform which allows each and every section of the society whether it be a farmer, artisan, villager or a scientist or policy maker. In this perspective, IISF is matchless and vibrant experiment.

India International Science Festival offers many different forms of engagement such as, lectures, dialogues, panel discussions and debates; through hands-on demonstrations, shows, exhibitions, and workshops; in form of science-related theatre, etc. The goal of the science festival is to engage citizens with science to inculcate scientific temper as the end result.

The theme for this year’s festival was ‘Science for Aatmanirbhar Bharat and Global Welfare’ which showcased the contribution of scientific and technological endeavors to realize the goal of Atmanirbhar Bharat Mission. This year, there were total 41 Events under 9 broad Verticals. Many of Cabinet Ministers, MPs and international representatives graced the events of IISF apart from leading scientists, researchers, policy makers, science communicators, film makers, entrepreneurs.