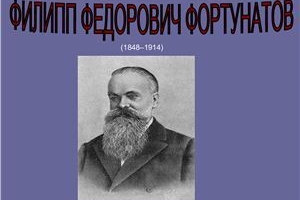 On June 3-4, 2021, a national (with international participation) scientific conference “The Second Fortunatov Readings in Karelia” was held at Petrozavodsk State University. This year the conference was implemented in an online format on the Zoom platform.
The initiators of the conference at PetrSU were the Department of the Russian Language of the Institute of Philology. The conference was dedicated to the creative heritage of FF Fortunatov (1848-1914), the famous Russian linguist who headed the Moscow neogrammatic school, because the life and work of Philip Fedorovich are inextricably linked with the Karelian land.

“The Second Fortunatov Readings in Karelia” is an attempt to sum up certain results of many years of studies on grammar and comparative studies, the history of language, as well as to honor the merits of scientists engaged in morphological and syntactic problems, comparative typological research, dialectology, as well as to determine the prospects for subsequent linguistic research. The conference brought together more than one hundred scientists from all over Russia and from abroad.

On June 3, on the first day of the conference, the first part of the plenary session “The Scientific Heritage of F. F. Fortunatov and Actual Problems of Modern Linguistics” , word formation and morphology: problems and prospects of study, the latest trends in Russian speech “and” Methods of teaching a language “.

On June 4, the conference continued with the second part of the plenary session, and then sectional sessions were held: “Syntax of the Russian language”, “Comparative and typological linguistics”, “Evolution of Slavic languages ​​and the history of the Russian literary language”, “Dialectology and areal linguistics”, “Problems of lexicology and lexicography “,” Communication theory. Medialinguistics. Linguoculturology “,” Linguopoetics “.