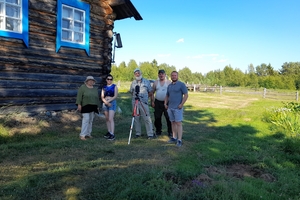 The second stage of the research expedition “Kalevala 2021”

The second stage of the research expedition “Kalevala 2021” took place, in which students, employees of the Institute of Forest, Mining and Construction Sciences and the Botanical Garden of PetrSU took part.
Associate Professor of the Department of Technology and Organization of Construction E.I. Ratkova, leading specialist of the Botanical Garden A.V. Kabonen, undergraduate students A.V. Ryamakov and K.S. Efimova.

As part of the research expedition “Kalevala 2021”, work continued on the survey of objects of cultural heritage of the 17th-19th centuries of the Kalevala region.

The work was carried out in the village of Haikola. A 3D scan of Kuzmin’s house (Ontontalo), Kuzmin’s barn and Stepanov’s barn was carried out using a 3D scanner, the technical condition of these objects was determined, and a survey was made from a quadrocopter.

In addition, objects of cultural heritage in the Kalevala village were examined: the house of G.A. Leontyeva, the house of the engineer Moberg and the barn from the estate of V. Yamanen.

Research materials are being processed.

An ‘astounding’ find reveals a rare cause of epilepsy