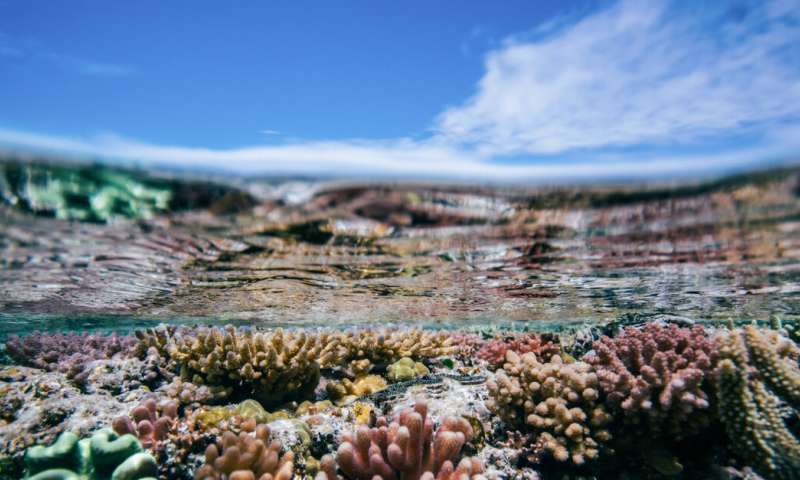 The ‘smell’ of coral as an indicator of reef health

A study led by Dr Caitlin Lawson is the first to explore the mix of volatile gases emitted by healthy and stressed corals, identifying a distinct chemical diversity among compounds that may play important – but previously unrecognised – roles in reef functioning.

You might not normally think about what corals smell like – or how the smell changes during heat stress. However, that is what researchers from the University of Technology Sydney (UTS), the University of Sydney and Southern Cross University set out to investigate on the Great Barrier Reef.

Every organism releases a distinct mix of volatile gases that makes up their smell and we are learning that these “smells” can tell us a lot about health. Some individual gases that make up the overall smell even have the ability to influence how an organism copes with stress, and once released from reefs, these gases can affect atmospheric processes.

Despite their importance, these volatile gases have received little attention in tropical coral reefs. This study is the first to explore the overall “smell” of healthy and stressed corals, identifying a distinct chemical diversity.

The research, led by Dr Caitlin Lawson in the Climate Change Cluster at UTS, discovered that across the coral species studied on Heron Island in the southern Great Barrier Reef, the abundance and chemical diversity of their gas emissions fell significantly during heat stress experiments. The findings are published in the journal Global Change Biology.

“Our results provide the first insights into the range of gases produced by reef-building corals and highlight a diverse suite of compounds that may play potentially important – but previously unrecognised – roles in maintaining healthy reef functioning,” Dr Lawson said.

“Our results also reveal that heat stress dramatically decreases the chemical diversity, quantity and functional potential of these important compounds, which could further impact the capacity of corals to cope with increasing temperatures.”

Co-author Dr Jean-Baptiste Raina said he was surprised to discover just how many different chemicals made up the “smell of these corals”, when previously only a handful of compounds had been identified. He says that number is “just going to keep growing, the more we look into it and the more species we start to investigate”.

Further unlocking the complexity and diversity of these reef gases will allow scientists to understand just how they might be silently driving the health and resilience of deteriorating coral reefs, Dr Lawson said.

“We know that within terrestrial ecosystems, some of these compounds can help plants deal with drought conditions, for example, or heat stress or insect attack,” she said.

“I get really excited about the signalling that could be happening between different species of corals, or whether they have certain smells that they’ll release that might attract grazing fish if there’s too much algae. Is there a certain smell that indicates corals are more vulnerable?

“With the increasing frequency of heat stress events – and it is looking likely that bleaching will occur again in early 2021 – it is even more important that we understand coral emissions as they may prove to be a key tool in our efforts to monitor and conserve coral reefs.”

Senior author and leader of the Future Reefs Team at UTS, Associate Professor David Suggett says the discovery adds to the evidence that, just like humans, reefs rely on multiple forms of communication to stay healthy.

“Coral reef diversity is sustained through sights and sounds, and our work shows that smells also play many critical roles,” he said.

“The discovery of a loss of these smells under heat stress driven by ocean warming is yet more evidence reefs will change as we know them unless we urgently tackle climate change.”

Anton Johnson has been honoured for his 35 years of service and dedication to UCT.