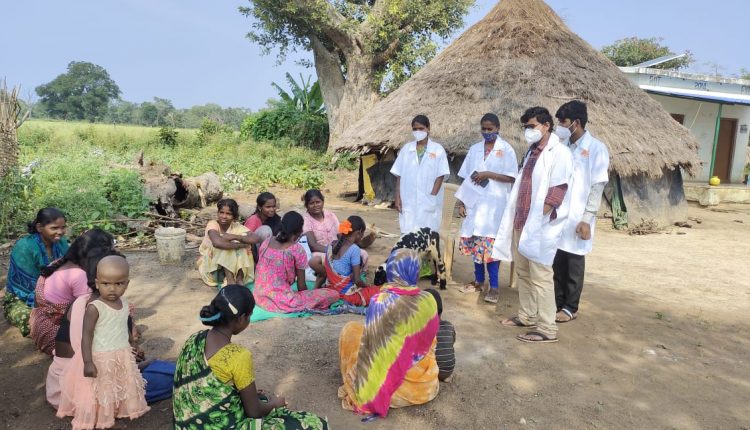 The Total Health programme by The Apollo Foundation in Amrabad District, Telangana

Agrabad is a Mandal in Nagarkurnool district, Telangana It is the largest mandal in the district area-wise, but the population density is less. Large portions of the mandal are occupied by Nallamala forests.

The Apollo Foundation’s this monthly Total Health programme in Amrabad has a mission of creating wellbeing for all persons.

Amrabad, serving the particularly vulnerable tribe, the Chenchus, conducted a water awareness drive in Mallapur Penta, for the 50 or so families there. This was the first of 10 more water awareness camps that will be conducted through the year deep within the Amrabad Forest Reserve, where the tribal people live in clusters called pentas. About 200 more families will benefit from the drive.

The drive itself was conceptualized when the doctor stationed with the Total Health clinic found a high incidence of typhoid, cholera, and the frequent occurrence of coughs, colds, and allergies. Most Chenchus have to walk at least 1 km to access water mostly from ponds, which due to its scarcity is used for all purposes: bathing, washing, drinking, and cooking.

The workshop included the giving away of water purifying tablets with guidelines on how to use them, and also awareness around basic hygiene practices while storing drinking water.

The development is based on the principles of medical care at Total Health works on 6 pillars, one of them being Water, Sanitation, and Hygiene (WaSH). The programme comes under the umbrella of the Apollo Foundation and is affected by people who understand the environment and the civic.

iednewsdesk May 19, 2022
One of the most remarkable carbon-based nanomaterials are luminescent carbon dots, the physical and chemical…

University of Tokyo: Seeing is deceiving