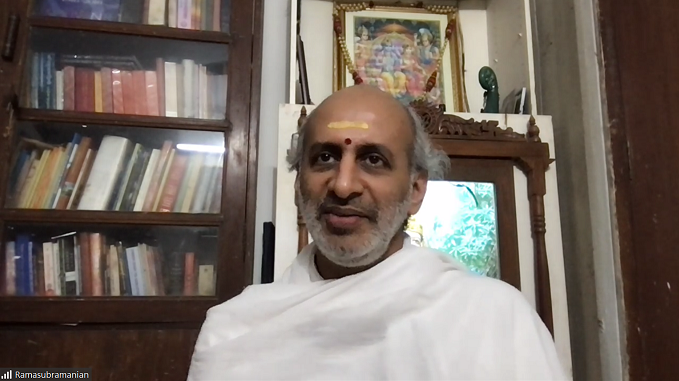 Gandhinagar: Bringing yet another intriguing topic to learn and think about, the Indian Knowledge Systems (IKS) elective course by the Indian Institute of Technology Gandhinagar (IITGN) hosted a lecture on ‘Does it make sense to read Sanskrit kavyas?’. A distinguished scholar of Sanskrit and Indian intellectual traditions, Prof K Ramasubramanian, delivered this talk on February 8, 2022.

In this age, when the exploration of science and technology has advanced at an enormous and breathtaking pace – influencing our lifestyles in unforeseen ways – what is the use of studying the Sanskrit language or its literature? It is a question that may linger in young minds today, which is perfectly legitimate and understandable. During the talk, Prof K Ramasubramanian explained what made philosophers such as Sri Aurobindo and even scientists such as C V Raman plead to study the Sanskrit language. He also highlighted the division of Sanskrit corpora broadly into two types: shastra and kavya. The moment we start looking at the theoretical aspects of a discipline, we would call it a Shastra, e.g. Natya Shastra, Sangeeta Shastra, Ayurveda Shastra, Vedanta Shastra, Nyaya Shastra, etc. On the other hand, kavya originates from the word ‘kavi’. According to the Ishavasya Upanishad, a kavi is someone who can transcend time and present their work (kavya).

Speaking about the enormous significance of Sanskrit kavyas, Prof Ramasubramanian said, “The Sanskrit language has produced thousands of remarkable kavyas. We can handle various situations of life brilliantly with the help of the wise lessons that these kavyas impart. The kavya literature of the Indian knowledge systems essentially tries to bring in what is there in the shastras in an appealing way. It surfaces at various points of time, guiding us to maintain the necessary balance and progress in our lives.”

Giving more insights, Prof Ramasubramanian said that the 14th-century rhetorician Vishvanatha’s Sahitya Darpana broadly categorised kavya into drishya kavya (dramas: that can be enacted) and shravya kavya (can be heard but not enacted). Mammata in Kavya Prakasha mentioned that people who can compose Sanskrit kavyas and employ these kavyas under various situations gain fame. They also win over the hearts of kings, gain an abundance of wealth, and transcend to a completely different and beautiful plane. The Sanskrit verses of the Panchatantra stories beautifully encourage children to adopt good things and drop bad things.

Prof Ramasubramanian also read out and explained several Sanskrit verses composed by great poets of ancient India like Kalidasa and Bhasa to emphasise the need for studying Sanskrit kavya in the present times since this rich literature ultimately aims not only at helping us lead meaningful lives but also at the “alleviation of the affliction of those in distress.” The session concluded with a lively Q&A session. Prof Subramanian will deliver his second lecture titled ‘The kavya aspect of the Siddhanta-jyotisha’ on February 15, 2022.

Prof K Ramasubramanian is a Professor at IIT Bombay in the Cell for Indian Science and Technology in Sanskrit, Department of Humanities and Social Sciences. He was honoured with the title “Vidvat Pravara” in 2003 for completing a 14-semester program in Advaita Vedanta and was conferred the prestigious award of Maharshi Badarayan Vyas Samman by the President of India in 2008. He is one of the authors of Explanatory Notes of the celebrated works Ganita-yuktibhasha, Tantrasangraha, and Karanapaddhati, which brings out contributions of the Kerala School of astronomers and mathematicians. He has edited various Indian astronomy and mathematics works and authored several research papers. He is a member of the apex bodies in institutions such as ICPR and NCERT and is a Fellow (FNA) of the Indian National Science Academy.

This is the sixth edition of the Introduction to Indian Knowledge Systems elective course, IKS 2022, being held online on the theme ‘Precolonial India’s Treasure House of Literatures’. The course is open to students and anyone interested in India’s knowledge systems and cultural heritage. They can join the course for free by registering online at: http://iks.iitgn.ac.in/. All lectures will be live-streamed on IITGN’s YouTube channel. The course’s website will carry regular announcements and updates on the speakers and lectures.

Union Minister Dr. Jitendra Singh says, a number of initiatives are taken to make India the global leader in space science and technology