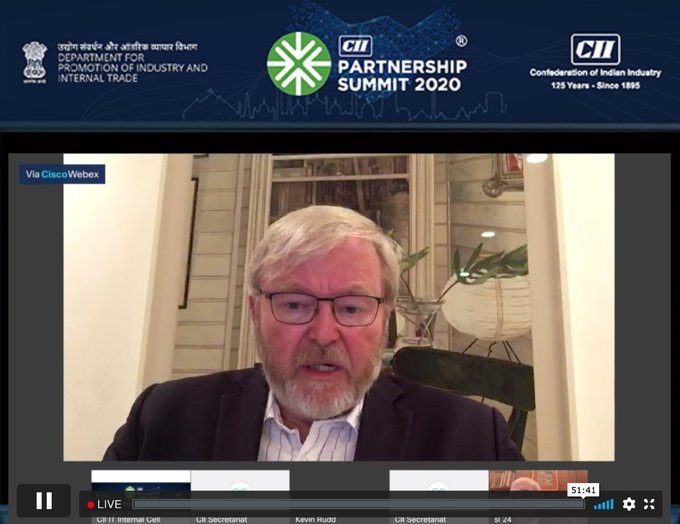 New Delhi: Speaking at the CII Partnership Summit 2020, Mr Kevin Rudd, President, Asia Society Policy Institute and former Prime Minister of Australia, mentioned that the world wanted a strong India and by continuing to have a liberal economic environment, India would achieve even faster growth rates. Mr Rudd was in conversation with Mr Dhruv Sawhney, Past President CII and Chairman and Managing Director, Triveni Turbine Ltd. at the Summit.

Mr Rudd further said that the current crisis arising out of the global pandemic was different from the financial meltdown of 2008 as it had still not resulted in a financial crisis. He mentioned that the public health crisis had led to a real economy crisis which had severely affected global employment. He further said that a potential debt crisis loomed large, emanating from the current global economic problems as sovereign indebtedness and bank crisis had the risk of bankrolling into a financial crisis.

Mr Rudd said that the G20 and global multilateral institutions including the IMF had learnt from the 2008 crisis and were proactively taking advance measures.

Mr Rudd further said that green economy approaches will play a significant role in the post pandemic long term sustainable recovery. He also mentioned that India has set up its own ambitious renewable energy goals and even exceeded them. “India’s clean energy initiatives are backed by global advances in green technology – especially solar power, wind power and energy storage,” he said. Mr Rudd further mentioned that India should focus on solar energy and link our electric grids to the solar power generating plants and we should look at decommissioning the old coal plants.

Mr Rudd mentioned that the development of the vaccine and its global distribution should be a joint global effort. “By pooling the financial and scientific resources, the participating economies will be able to benefit and secure successful vaccines in a cost-effective, targeted way,” he said.

Mr Rudd spoke of the importance of the Chinese private sector and its role in the tremendous economic growth that China has witnessed particularly in the past two decades or so. However, there has been a decline in the private fixed capital investment in the recent years. Mr Rudd mentioned that there will be a new dynamic in China US relationship because of the new administration. The question is how this will affect the rest of the world as this is a new bipolar dynamic.

Mr Rudd said that in this moment of profound crisis, the world had the opportunity to build a more resilient, sustainable economy that will put the world on an irreversible path of net-zero emissions. He said that the world must aim at creating the jobs we need to build a modern, sustainable infrastructure now and deliver an equitable clean energy future.

Mr Rudd added, “Strategic counterbalancing is the need of the hour and to look at collective security measures something like an Asian Pacific Community which establishes a basic level of principles of confidence of security building measures in an increasingly bipolar world is required, so that we do not enter into crisis, conflict or war by accident.”
Introducing Mr Kevin Rudd, Mr Sawhney said that Mr Rudd had steered Australia through a difficult time post the financial crisis of 2008 and his experience would greatly help in steering nations out of the current crisis caused by the pandemic. His having worked and lived in China for about 35 years gives him a unique insight into the Chinese thought process.